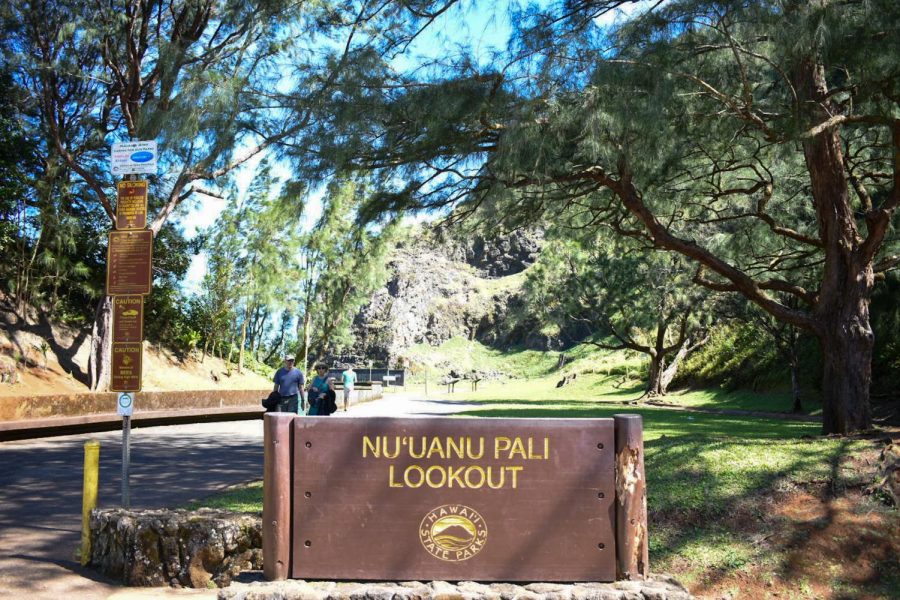 The Pali Lookout is widely known in Hawaiian lore as a sacrificial sight in the battle for leadership of the islands.

Oahu is paradise, with its beautiful beaches and lush mountains, but the uninformed tourists have no idea about all of the haunted, terrifying places that locals avoid. Growing up on Oahu, and living here my entire life, I’ve heard many stories of suspected “haunted” places. However, I have first-hand knowledge through myself as well as people close to me of the following places being haunted.

Old Waialae Drive-Inn
The Old Waialae Drive-Inn Theatre, which was located at Waialae and 21st Avenue but torn down in 1984, was built in 1956 next to a graveyard. While my mother was in high school, she and some friends went there to watch a movie and eventually had to use the restroom. While looking in the mirror, my mother saw a woman standing behind her with no facial details and long, gray hair. My mother sprinted back to the car where all her friends told her about the reputation of the haunted women’s restroom. Don’t believe me? There was even a news story about it once.

Camp Erdman
Although Oahu’s North Shore is mostly known for its beautiful beaches, it also has a dark side, and that’s the bone-chilling cabins of Camp Erdman near Mokuleia. When I was in the 5th grade visiting on a class camping trip, we were assigned to specific bunks and were told to do everything in pairs. My friend and I got up to use the bathroom in the middle of the night, and we both heard the eerie sounds of children laughing and playing in the cabin next door. Thinking nothing of it, we both walked back to our bunks and went back to sleep. The next morning we were in disbelief when our group leader told us that the cabins next to ours were empty. Till this day, I still believe that there were kids playing and laughing in the cabin next to mine.

Morgan’s Corner
Legend has it that a high school couple was parked under a tree Nuuanu Pali Drive, and as they started to get to know each other, they heard scratching on the roof of their car. The teen boy, wanting to show his bravery, got out of the car to go find where the sound was coming from. After a few minutes passed and he didn’t return, the girl also decided to get out and find where he went. To her shock and horror, she found him hanging from a tree branch above the car with his feet scraping on the roof. Frightened, her first thought was to run, but as she looked around there was no one to run from. My sister and a few friends briefly stopped at this spot one night to see what it was all about. It didn’t take long for them to hear what they thought was the sound of scratching on the roof of the car. In a total panic, they sped off without checking the source of the sound and none of them have ever been back.

This Honolulu Magazine reporter did some digging and found that this story is a hoax, but I’m still convinced there’s some bad mojo there.

Kapaa Quarry “Dump” Road
Kapaa Quarry Road is usually used for a way to get to the dump, but at night the road turns into a dangerous track for reckless people to test their luck playing “chicken.” Over the years some people have driven off the road to their death. My brother-in-law and a few friends decided to use this road as a shortcut one night, and as they were driving home, they saw what they thought to be headlights coming at them. They swerved to miss an oncoming car, but when they looked back to see what happened there was no trace of any car whatsoever. This isn’t the first time that I’ve heard this.

Nuuanu Pali Lookout
Despite the fact that the Nuuanu Pali Lookout is a scenic tourist attraction by day, it has a creepy history leading it the last place you’d want to be at night. A handful of close friends and family members have visited this spooky spot at night, and all have heard the same spine-tingling sounds of what they thought to be fighting and shouting when no one else was around. This was the place where over 400 of Chief Kalanikapule’s warriors were forced off the cliff to their deaths by King Kamehameha I in the battle to unite the islands. The bones of the fallen warriors are still said to be at the bottom of the lookout.