Opinion: Travis Scott should be canceled and arrested 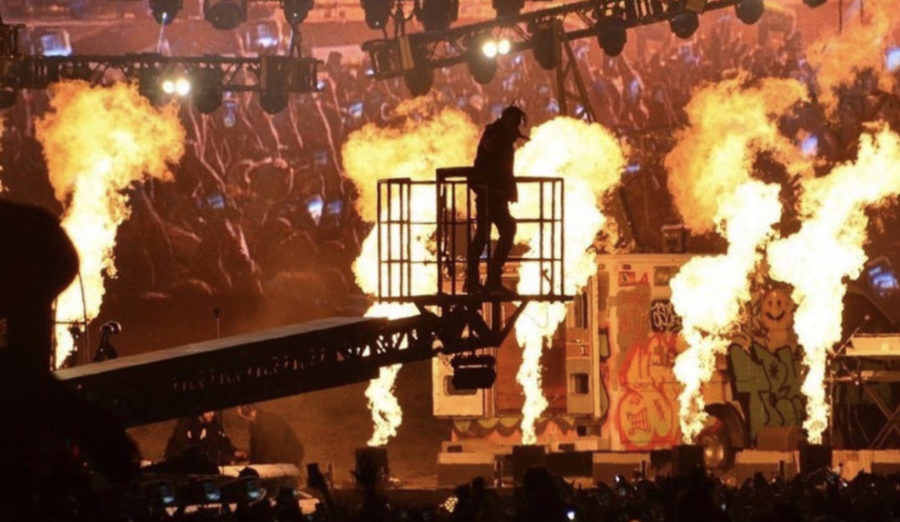 A picture Travis Scott posted to his instagram of him preforming on Nov. 9.

After the tragic events of the first day of Travis Scott’s two-day festival, AstroWorld, Scott should be arrested and finally held accountable for his actions. This is not a one-time offense; it has become a pattern. The Houston native should not be able to continue to take lives for the sake of “raging.”

Since the concert this past Friday, the rapper has canceled the second day of the AstroWorld festival, pulled out of the Day N Vegas festival he was set to headline this weekend, offered to pay for the funerals of the eight who passed away at AstroWorld, and is funding complimentary online therapy through the online counseling and therapy service – BetterHelp. Such measures signify that Scott’s public relations team is working to conceal any blame pointed towards Scott and distract the public eye from his clear disregard for his fans’ health and safety, as well as “rage regardless” mentality that Scott encourages in his fans and concert attendees. But these actions are performative and are driven with the intent to deflect the spotlight, rather than take on true accountability for this tragedy.

The American rapper is a multimillionaire who could not care less about the consequences of his actions and who acts like he doesn’t care because he knows he can pay his way out of it. His fan base was founded on creating chaos and disregarding those around you for the sake of “raging” and having a good time.

In an article released this past weekend, the New York Times reported that “eight people died, ranging in age from 14 to 27,” and “hundreds more were treated for injuries at the field hospital at the concert venue, the NPG Park in Houston, or at local hospitals.”

It is not unusual for tragedies happen at concerts. It is common for people to pass out at concerts or get hurt in a mosh pit. The difference between Scott and artists like Adele, Drake and Niall Horan is that they stopped their concerts to get their fans help and encourage concert safety.

According to Insider, at one point during AstroWorld, the fans were yelling from the crowd, pleading with Scott to stop performing because people were dying. Radar Online mentioned that the concert attendees were going as far as to get up on stage to beg the staff and Scott to stop performing only to be ignored by the venue staff but also Scott himself.

USA Today reported that “Scott has been arrested at least two times for inciting riots and disorderly conduct at his shows,” and often “encourages his concert-goers to get rowdy.” According to Insider, Scott was arrested and charged in 2015 for disorderly conduct after his performance as Lollapalooza, in Chicago, and then pleaded guilty after being arrested on suspicion of inciting a riot at a concert in Arkansas in 2017.

During Scott’s 2017 run-in with the law, “police accused [him] of encouraging people at the concert to bypass security protocols and rush to the stage, causing several people to be injured.” In Arkansas, a charge of inciting a riot becomes a felony if someone is injured. As a part of a deal, and to wiggle out of actual accountability, “Scott pleaded guilty to disorderly conduct instead and paid a $7,465.31 fine mentioned by Insider.

Scott’s concert behavior has gotten a man paralyzed after the 2017 AstroWorld and now, most recently, eight people left dead and hundreds more were injured?). How are we idealizing idealizing someone who should be a felon so much that people are quite literally dying to see him. Scott facilitated and encouraged a deadly mob and should be paced behind bars because of it.