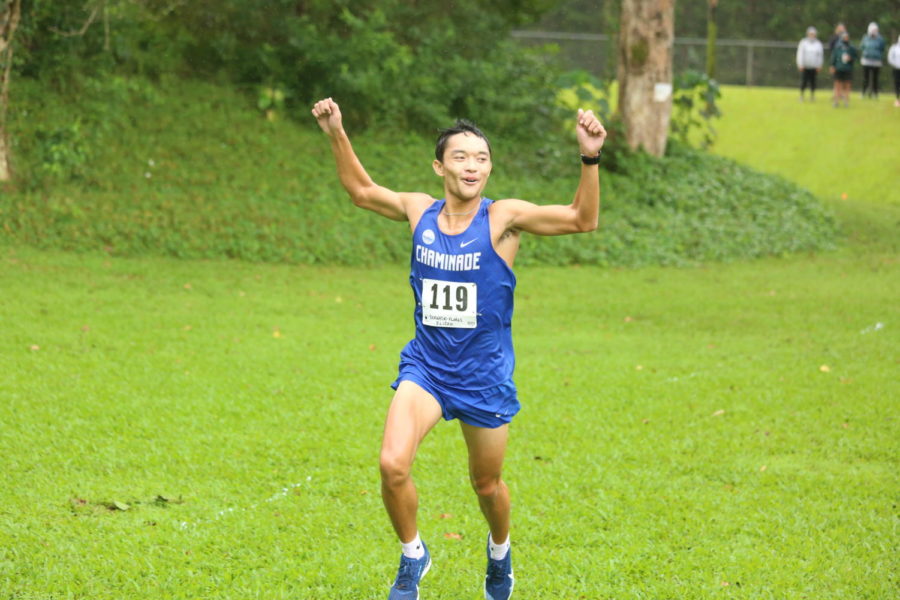 Elijah Bernardo-Flores is excited for the fall season, which was a bonus due to the NCAA granting an extra year of eligibility for all fall and winter sport athletes.

On July 25, 2020, Chaminade University announced that due to the concerns arising from all the challenges surrounding Covid-19, the PacWest Conference Executive Board voted unanimously to postpone intercollegiate competition in PacWest fall sports, which included men’s cross-country, until after Jan. 1, 2021.

Now, Elijah Bernardo-Flores is taking full advantage of his “Covid year” as an athlete due to the NCAA granting an extra year of eligibility for all fall and winter sport athletes in October 2020. Graduating from CUH in May with his bachelor’s degree in Criminal Justice and minor in Psychology, Bernardo-Flores chose to continue to participate in the men’s cross-country team while he is in graduate school at the university.

“I’m not done yet,” said the 21-year-old Bernardo-Flores. “I still have something to prove.”

Bernardo-Flores continued to run and train to stay ready just in case the season would come back in full swing.

“I was just feeling myself getting better and better,” Bernardo-Flores, an O’ahu native, said. “And I guess you can kind of see your times as a good progresser [sic]. After seeing my times getting better, I was like ‘Dang, if I can come back, I’m going to come back.’”

Bernardo-Flores has an outstanding athletic career at CUH. He has been named Academic All-Pac West for three consecutive years. During his senior year, he was named Pacific West Conference Men’s Cross-Country Scholar-Athlete of the Year, D2 ADA Academic Achievement honoree, and the team’s Scholar-Athlete and Most Inspirational runner.

Bernardo-Flores is looking forward to getting back to racing in the Fall 2021 season. He said that the chemistry on the team this year is what he’s most excited about.

“We got some fast cats coming onto the team now,” said Bernardo-Flores before the start of the season. “I’m just excited to see how that goes when we have our first race.”

The Chaminade University men’s and women’s cross country teams opened their season Sept. 4 at the University of Hawai’i Big Wave Invitational at the Kahuku Golf Course. The Silversword men came in second to Hawai’i Pacific University with 38 points while the Chaminade women finished fifth with 143 points. Owen Daugherty, a second-year Biology major at the university, picked up where he left off in the spring, finishing the 5-kilometer men’s race in 18:16.72 for a fourth-place finish.

Josiah Rodrigues, a third-year Criminal Justice major and member of the men’s cross country team, had nothing but positive things to say about Bernardo-Flores.

“Elijah is a very competitive runner,” Rodrigues said. “He definitely trained over summer and you can tell. With his fifth-year experience he’s the captain of the team and he helps the inexperienced runners really fit in and feel comfortable.”

The next meet for the cross country team is the HPU invitational on Saturday at the Kahuku Golf Course.