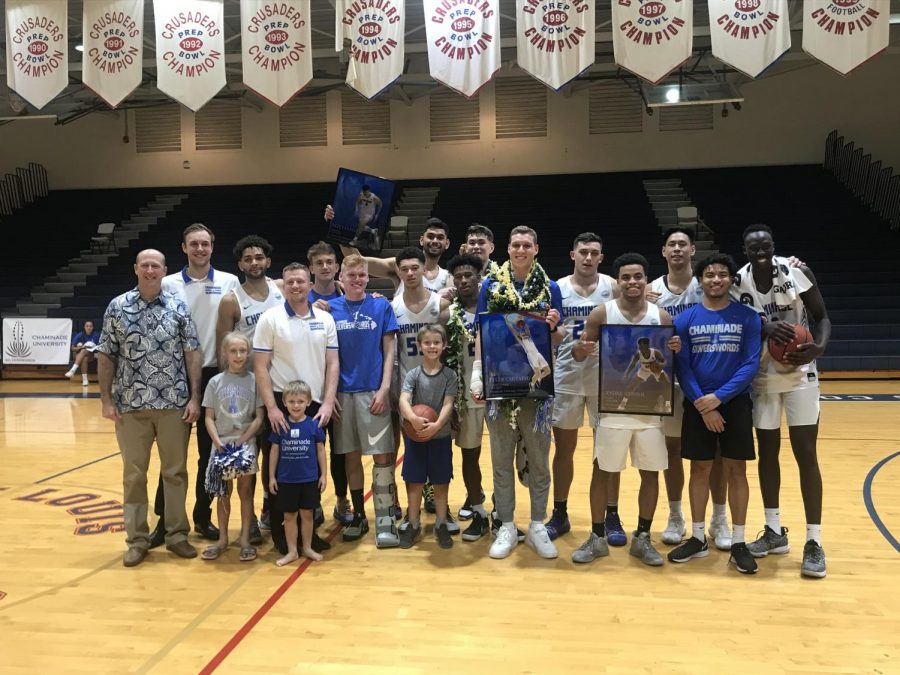 The Chaminade men’s basketball team thoroughly outplayed the Vulcans of UH-Hilo beating them 88-72 on Thursday night at McCabe Gymnasium. It was a great senior night for the home team and fans as the Silverswords jumped out early with a 9-2 lead coming off pin-point shooting. Chaminade improved to 17-10 overall and 15-7 in Pacific West Conference.

In the previous game against UH-Hilo earlier this month at Afook-Chinen Civic Auditorium the Silverswords easily won 92-70. So even with out two senior starters in Tyler Cartaino (season-ending wrist injury) and Andre Arissol (away from the team for personal reasons) the inspired Silverswords almost identically matched the score of the previous meeting with the Vulcans. The ball movement and superb passing by the Silverswords proved to be the difference in the game.

“It was a complete team victory,” said Eric Bovaird, who is in his ninth year as head coach of the Silverswords. “Dealing with the loss of two of our starters the guys went in and did an outstanding job with huge contributions both on defense and on offense.”

The Silverswords never allowed UH-Hilo to get comfortable in it’s half court offense by using a tenacious man-to-man switching defense where every shot was being contested. Chaminade owned the battle of the boards out rebounding the Vulcans 44-25. The Swords showed superior strength on both the defensive and offensive glass, limiting UH-Hilo’s second chance shots to less than 50 percent. 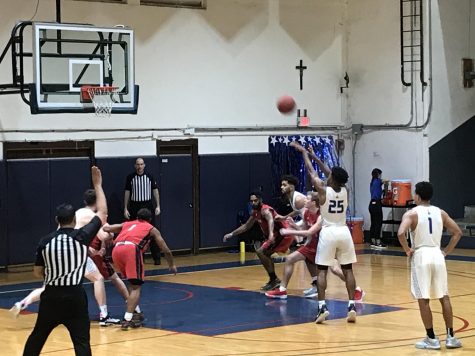 Dezz MelloSenior guard Kendall Small went 4-6 from the free-throw line in the win against the Vulcans on Thursday night.

On the offensive side of the ball the Swords shot significantly better at 55.9 percent from the filed to UH-Hilo’s 43.5 percent. Senior forward Eliet Donley led all scorers going 11-15 from the field and 5-8 from the charity stripe, totaling 28 points. The Silverswords showed excellent balance in scoring and sharing the ball with Donley, Kendall Small, Isaac Amaral-Artharee, and Bill Awet all in double figures. Redshirt junior guard Roman Young went 2-3 from downtown and added 5 assist to lead all players in assists.

“I just tried my best to keep attacking the basket,” Donley said. “It was nice to get a victory on senior night in front of our fans with such a great offensive performance.”

However, the assist of the night came with about eight minutes remaining in the second half when Small received a high outlet pass at mid court, causing him to jump high into the air and while in mid air feeding the ball to a streaking Donley for a two-step layup. The speedy Chaminade half court offensive ball movement resulted in numerous open layups which kept the Vulcans at a 7-9 point deficit throughout majority of the second half. The Swords also had at least half a dozen transition baskets on fast moving outlet passes.

“It was a good win,” Bovaird said. “But we have to get back to work and improve and continue to get better for the upcoming PacWest tournament.”

The Silverswords will now have a week to prepare for their next contest which will be in the PacWest Championships starting on Thursday in California at Felix Event Center.

Lady Swords lose their finale, 60-52, to the Vulcans
Four seniors celebrated their final career games in a Chaminade uniform. Senior guard Destiny Castro ended one of the greatest careers ever in Chaminade women’s sports school history with 13 points, five rebounds and three steals. She finished with 1,648 points and 293 steals, both of which are school records. Seniors Kali Benavente (six points) Breann Nueku (five points), and Kirstin Wong all saw playing time in the final night of action.