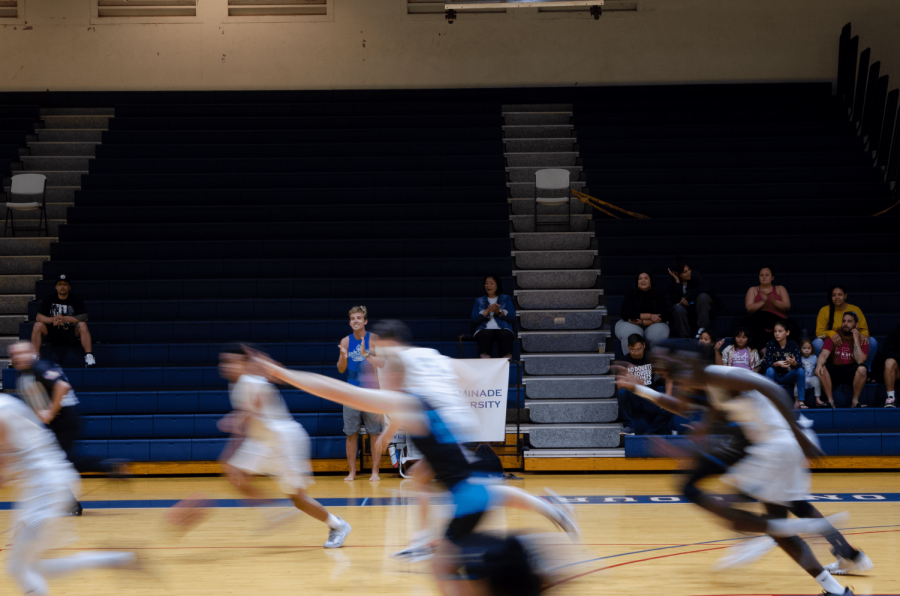 Ryan Look, 2016 CUH graduate, enjoys cheering for the Silversword men's basketball team as they play the HPU Sharks in the McCabe Gymnasium on Tuesday.

If you’ve been to any Chaminade University sporting event in the last three years, you may have seen a screaming, waving, barefoot fan standing right next to the court wearing a cut-up Chaminade t-shirt. Ryan Look is that guy. He gets a lot of attention in the crowd from his unabashed enthusiasm for the Silverswords and he loves it.

Look is a 26-year-old Chaminade University of Honolulu alumnus who has actively supported the Silversword ohana by attending as many basketball, soccer, and volleyball games as possible since his graduation in 2016.

“Cheering on is super fun to me because everybody’s around,” Look said. “That’s why I want to do it. I meet friends, everybody’s energetic, and everybody’s happy to be there.”

The self-professed “super fan” admits that he was more shy and less into showing school spirit during his freshman year at Mater Dei High School in California. That being said, he vividly remembers the game that brought him out of his shell and launched his passion for sports events.

“The one moment that defines my high school career is when we went from our high school to Sacramento to watch our boys and our girls play in the state championship basketball games,” he said recently.

This seven-hour road trip took place during his junior year of high school and ended with a title from the men’s and women’s teams. It also marked the first time Look let loose and went “nuts” cheering for a team. He loved the feeling of freely expressing his excitement without the pressure of having to act a certain way. This feeling is what fueled his passion for following sports teams and attending games.

After graduating high school in 2012, Look left his home in Newport Beach, Calif., to pursue a B.A. in Communications with a focus in Mass Media. Aside from his studies, he played golf at Chaminade and closely followed many of the Silversword teams. During his first year at CUH, the men’s basketball team scored an 86-73 win against the Texas Longhorns at the 2012 Maui Invitational Tournament. The excitement and enthusiasm that followed the first Invitational game that Look watched left him coming back for more.

Even after his four years at Chaminade, Look continued to keep up with the Silversword teams, despite his return on the mainland for two years. To this day, he is up to date with all of Chaminade’s teams but makes more of an effort to know the men’s basketball, women’s volleyball, men’s soccer, and women’s soccer players’ name and jersey number.

This tight-knit Silversword community is just one aspect that sustains Look’s love for CUH sports. Look said he feels accepted and embraced by the players and even the coaches. After a win, he will stay back and offer his congratulations to the team, and they often respond with appreciation for his continuous support. Another reason Look readily returns to Chaminade sports events is the free admission. He acknowledges that many schools charge “big bucks” to sit courtside. But he gets to attend the games and sit front row at no expense.

Living in Kaimuki makes for an easy commute from home to campus. Considering the location, Look is happy with his current living situation and likes to tell people that he is “here indefinitely.” The super fan said he has no doubt in his mind that for as long as he is on Oahu, he will be attending Chaminade games and supporting the Silversword teams.

“I think I want to see more students embracing it,” Look said. “I want them to feel the same way as I have. And it doesn’t take fully doing what I do but just being there to watch and shout some joy.”