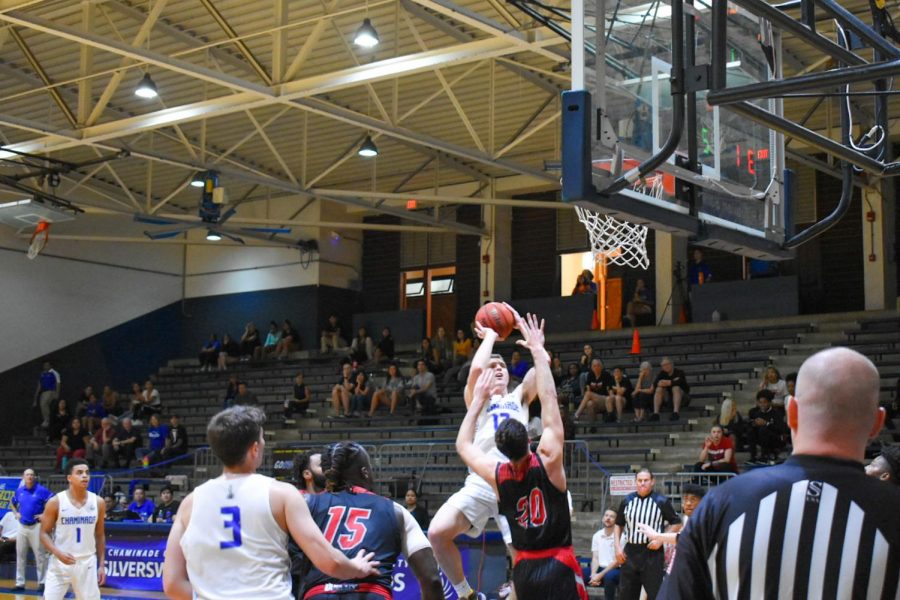 Senior forward Tyler Cartaino led the game with 32 points in the win against ART U.

The Chaminade men’s basketball team was picked to finish third in the PacWest Conference in the preseason poll. San Francisco’s Academy of the Art was picked seventh in the 12th-team league. So even after the Swords easily beat the Urban Knights 90-75 on Monday at McCabe Gym, it was the expected result but was still an important victory heading into a six-game road trip.

Entering the ART U game, Chaminade had won five out of the last eight games on Oahu. The Swords, however, lost 75-68 on Dec. 15 to the Urban Knights, giving them their worst loss of the season. So Monday’s game was a much-needed feel-good win before the Swords (12-7 overall, 10-4 PacWest) play the top half of the PacWest on the road in February.

“We felt embarrassed the last time we left their gym with the effort they displayed, so we for sure wanted to come out [Monday] with maximum effort and execute the game plan,” said Eric Bovaird, who is in his ninth year as head coach of the Silverswords.

The Swords immediately took control of the game with 7-0 start just two minutes in. Chaminade led by as many as 26 concluding the half at 55-31.

The Urban Knights cut the lead down to single digits (55-46) in the second half, silencing the small but faithful in attendance. A 3-pointer by senior guard Andre Arissol broke the ice for the Swords in the second half and got the team back on track . They attained total control from then on gliding to a well deserved 15-point victory.

This was the last game of eight consecutive games on Oahu.

“I give the guys credit, they bounced back after just two days and had an incredible first-half performance,” Bovaird said.

Cartaino, who was named PacWest Player of the Week, led all scorers with 32 points and shot 14-for-20 from the field. Arissol scored 16 points (4-of-9 from 3-point range) with senior guard Kendall Small recording 9 points to go alongside his 9 assists.

Coming off of a previous loss to Concordia Irvine 61-59 at home on Jan 25. , the Swords needed this win to build some sort of momentum into the toughest road trip of the season. Back-to-back losses before the road trip would have been catastrophic.

“This was our last home game for awhile, so we knew how important it was to set the tone for the road games we have coming up,” said Tyler Cartaino, a senior forward for the Swords.

The Swords will soon hit the road where they will face five of the top six teams in the conference. They will start with UH-Hilo, sixth in the conference, on Sunday, followed by a 9-day swing through California where they’ll play back-to-back games against the first and second-ranked teams, respectively, in Point Loma (15-3, 11-1) and Azusa Pacific (15-3, 10-2). Chaminade will then face Biola (12-7, 8-5), Concordia Irvine (15-6, 9-3), and Fresno Pacific (6-13, 4-9) which were all extremely close games when they played earlier in the season. The Swords lost to Biola in quadruple overtime 113-107 at home. Chaminade was able to sneak away with a 74-73 win over Fresno Pacific earlier this month.

It’s a brutal road trip, but Chaminade is optimistic that it will be atop the league standings when it returns for its last two home games at the end of February.

“This is definitely a good challenge for us,” Cartaino said of the team’s goals for this trip. “… Anybody can lose any game, but we will go over there and beat Hilo, and then go win five games in Southern California.”