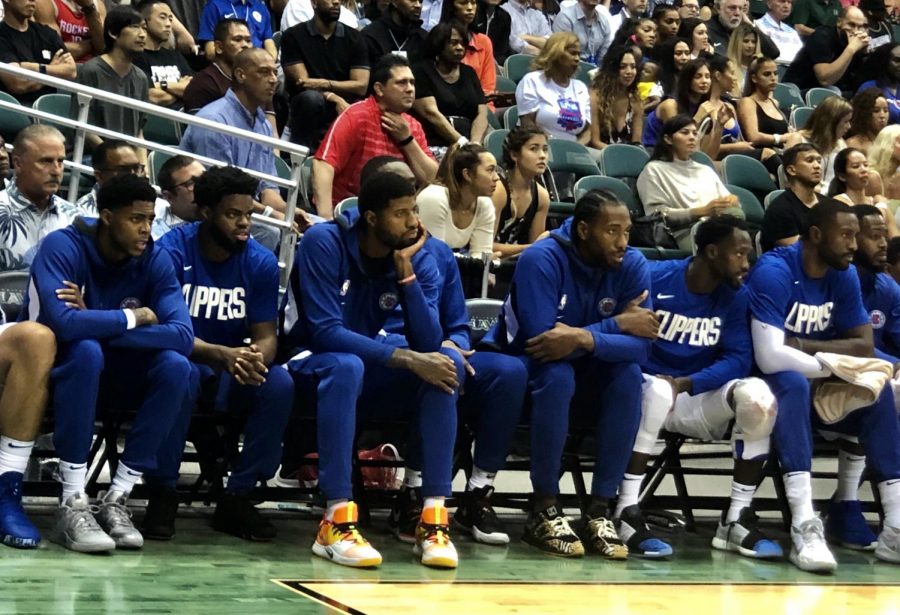 Despite acquiring two of the NBA’s top players this summer, the Los Angeles Clippers are in no hurry with rushing the men back for the preseason.

Stadium seats were packed last night as the Stan Sheriff Center hosted a preseason game between the Houston Rockets and L.A. Clippers. But two of the biggest names that were supposed to be featured in the game – NBA Finals MVP Kawhi Leonard and MVP finalist Paul George – were sidelined with injuries. Though the two superstar forwards were on the court warming up with teammates and trainers, they both sat on the Clippers’ bench for the entire duration of the game. The duo will be traveling with the team as the Clippers carry out their training camp on Oahu.

“Unfortunately two of our big guys couldn’t play …” said Clippers head coach Doc Rivers after a 109-96 loss to the Rockets. “We want to make sure [George and Leonard] are at their best when we send them out there.”

In an article by ESPN on Sept. 29, George said that he is undergoing recovery hoping to get back on the court by November. As of now, he is healing from a surgery done in May on a slightly torn tendon in his right shoulder and a lesser procedure from June done on his left labrum. Although the pain is being dealt with, the long-term affects that it would have on him are still unclear.

Before injuring his shoulder in Feb. 26 against the Denver Nuggets, George shot 40.2 percent from 3 with nearly 10 attempts per game. Afterward, his 3-point shot dropped to around 34 percent and his true shooting percentage fell from around 60 percent to just above 50.

Leonard has also been impacted by the injuries that he suffered throughout his career. On May 14, 2017, Leonard landed on an opponent’s foot, causing him to land awkwardly and hurt his ankle. That injury led Leonard to take caution when playing on a night-to-night basis by sitting out of games to get some rest as seen throughout his one-season tenure with the Toronto Raptors. That year, Leonard missed a total of 22 games in the regular season.

The possibility of the team’s best two players missing out on bits of the regular season could prove troublesome with an ever-growing power imbalance in the Western Conference and the rising talent in the East. Alongside the Clippers, the Los Angeles Lakers, Utah Jazz, Philadelphia 76ers, and their opponents from last night, the Rockets have all added significant pieces to their team that make each basketball club a contender for a championship this coming season.

The Clippers will be marching onward nonetheless. Rivers ensured after their game with the Rockets that he plans to let Leonard play without a minute restriction once the regular season comes along. With George planning to make a return in November, the Clippers are left with time to construct lineups to counter the growing competition for a favorable playoff spot.

Although Hawaii fans were unable to see the Clippers superstar duo on the court yesterday, they will be soon as the regular-season approaches.

The Clippers’ first official game will be on Oct. 26 with the team facing LeBron James and the Lakers.