Harden gets 37, Rockets Eclipse the Clippers 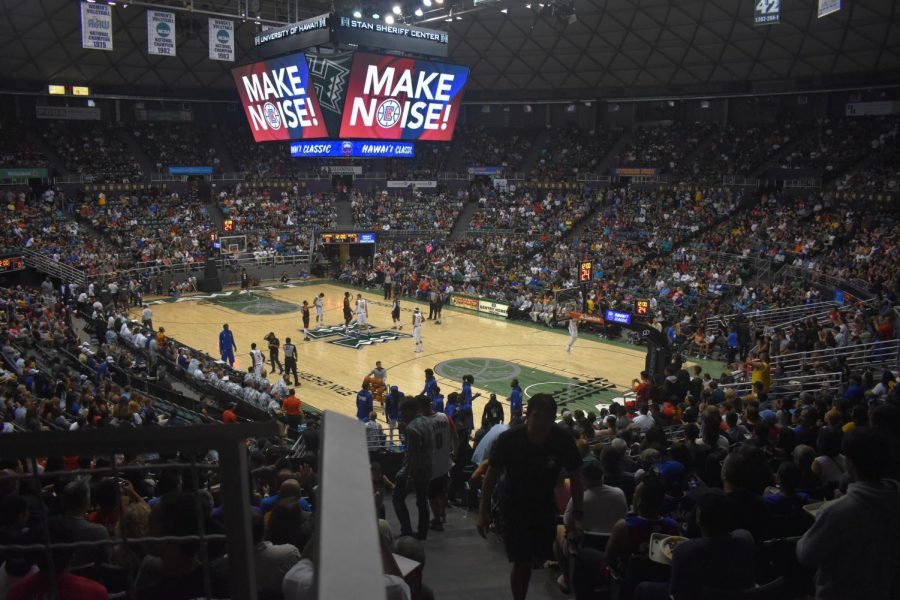 The Stan Sheriff Center was a sellout for the Clippers and the Rockets preseason game on Thursday night.

The Houston Rockets beat the Los Angeles Clippers 109-96 in Hawaii at the Stan Sheriff Center on Thursday night. Most of the superstars sat the game out due to it being a preseason game. Given the circumstance, the fans didn’t shy away as the Stan Sheriff Center on the campus of the University of Hawaii was a sellout. Houston Rockets elite guard James Harden showed off why he has been an MVP contender the last three seasons.

Harden ended the game with 37 points in just three quarters of play. The sellout crowd couldn’t get enough of Harden and kept egging him on to do more as they yelled and cheered for him.

The Clippers played without their two biggest additions from the summer, Kawhi Leonard and Paul George, who watched from the sideline. As expected, guards Pat Beverly and Lou Williams sat out in the second half as the rookies got playing time. This was the Clippers first exhibition game of the season.

“It was great to get back into the swing of things,” said Doc Rivers, who is starting his fourth year as head coach of the Clippers. “We’ve got to get back to work and get a lot better. It’s just going to take a little while to get the rust off. Once we do that, we will be able to do some serious damage.”

Although scoring 37 points, Harden seemed to be a bit rusty making just 4 of 14 3-pointers. A good chunk of Harden’s points came from the free-throw line where he went 17 of 20 to go alongside his 7 assists and 7 rebounds. Harden also tried a running, one-legged, 3-pointer – a non-traditional move he’s been working on in the offseason –in the second quarter, which drew a foul.

The Rockets played without their newest asset to the team, Russell Westbrook, who is still rehabbing after last season when he re-injured his right knee coming down from a dunk. Despite the fact of not being suited up, Westbrook was still dancing and cheering on his teammates as they made exciting plays on the court.

“As long as we win, that is the most important part,” said Westbrook, who is an eight-time NBA All-Star. “Doesn’t matter if Harden is doing all the scoring, I’ll sit there and cheer. As long as the Houston Rockets are winning, that’s all that matters to me.”

The Rockets were smooth sailing throughout the entire game as they never trailed. Starting the fourth quarter, the Rockets had a lead of 24 points, which turned into 31 just two minutes into the fourth. This preseason win improves the Rockets to 2-0 with the reigning NBA champs, Toronto Raptors, up next in Japan on Oct. 10.

Mike D’Antoni, who is in his fourth year as head coach for the Rockets, revealed in the post-game interviews that Westbrook will play in Japan.

The Clippers will stay in Hawaii for a few more days and prepare for the next preseason game against the Shanghai Sharks from China on Sunday. It is still doubtful that the Hawaii fans will get to see Leonard take the court against the Sharks, but it is possible that George will get some playing time on Sunday night, according to ESPN.com. Tipoff is at 1 p.m. at the Stan Sheriff Center.