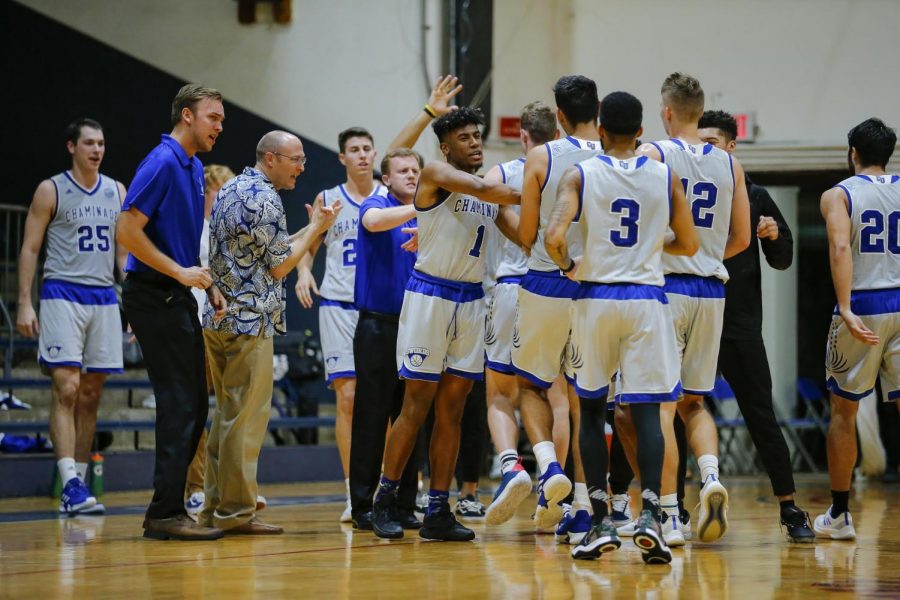 The men’s basketball team had a big last two weeks with four home games against the top teams in the conference. The team remains 3rd in the PacWest Conference after the win/loss split games these past two weeks.  The team was 12th in the nation and now, after the last four games, has been placed in the 18th spot on the Division II national ranking.

The team opened the home game week with a close loss against, number one in the conference, Point Loma Nazerene, with a score of 75-71. The Sword’s then came back to beat Concordia Irvine, 79-76, that is second in the conference. Shortly after, Azusa Pacific thumped Chaminade, 80-64. The Swords ended the home stretch with a win as the team routed Biola 82-58.

Grant Dressler scored a career high of 34 points against Concordia University. Tyler Cartaino, a redshirt junior, scored 24 points against Biola, a point away from matching his career high. Erik Scheive, a 6-10 forward, was overall consistent throughout the week averaging  10 points a game.

“(Azusa Pacific) simply outworked us,” said junior transfer Andre Arissol who shot 2-for-6 from the field.

“The losses made us reflect on what we need to do better and kind of get us in gear for the rest of the season,” Dressler, a 6-7 senior guard said.

The Las Vegas native also added that the teams were the hardest in the conference and those teams weren’t just going to hand over a win. He talked about in order for the team to win they need to give their best effort and work on their overall toughness.

“Some games shots just aren’t falling and you can’t control that but you can always control effort and we felt like we let down in some areas effort wise but after watching film and talking over it we know we can do much better,” said Dressler.

The Sword’s are now onto to the next, with an away game against rival Hawaii Pacific University. Earlier this season the men’s team beat HPU, 69-55. The upcoming game will set a tone for the rivalry, considering, in the last 3 years HPU has held the winning streak. But the tide seems to be changing as Chaminade has won the last 2 times against the Sharks.

“I’m excited about the HPU game, it’s always a good atmosphere when we play them and we get to play in the Blaisdell center which is a nice place to play at. It would be nice to get the season sweep on them,” said Dressler.

Overall, the Sword’s had a split week against the top teams in the conference. The men’s basketball team will play HPU, that is 11th in the PacWest, on Monday, Feb. 4, at 6:30 p.m. at the Neal Blaisdell Center.