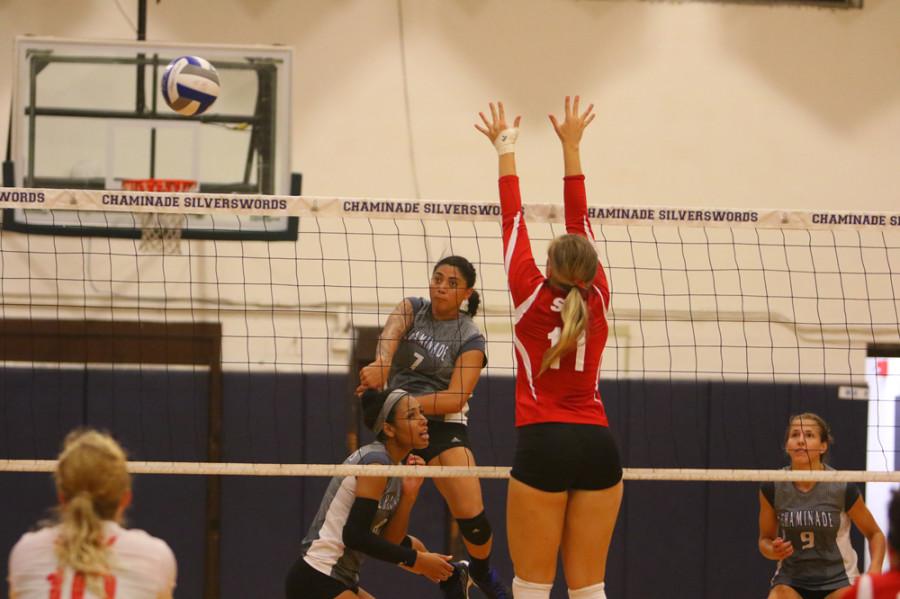 Keani Passi leads the Lady Swords in kills this season.

Senior Keani Passi is new to the Chaminade women’s volleyball team this year and brings exceptional experience from her days with the University of Hawaii Rainbow Wahine. Passi is from Pearl City and started junior college in Idaho, where she won the NJCAA national championship and garnered the AVCA junior college player of the year honors. She went on to enroll at UH afterward.

After having to sit out a year due to NCAA transfer rules, Passi played sparingly for the Rainbow Wahine and left abruptly, claiming undisclosed personal reason.

When it came to finding a school to transfer to, she remembered meeting Kahala Kabalis-Hoke after a high school match when the coach was an assistant at Hawaii Pacific University. Now at Chaminade, Kabalis-Hoke was able to bring Passi to the Lady Swords.

“I wasn’t really getting a lot of attention out of high school, but Kahala was coaching for HPU, and she was one of the only people that came out to see me,” Passi said.

In 11 matches with the Silverswords thus far, the 5-foot-11 senior hitter has played every set with the team. She has pounded down 152 kills out of 383 attempts and notched 12 service aces. She is currently third in the PacWest Conference in total kills and seventh in kills per set (3.62).

She has been a major part of CUH’s impressive 10-1 record this season.

“Just an opportunity to continue playing competitively and have the play time and opportunity to finish my last year strong,” Passi said of her goals at Chaminade.

Her numbers at Chaminade so far have far outpaced her output at UH, where she played in 18 matches (with three starts) and recorded 27 kills. She notched 11 of those kills in a four-set win over San Diego State, by far her best performance as a Rainbow Wahine.

As a Lady Sword, she made her presence felt immediately when she crushed 20 kills (her most so far this season) in her debut on Sept. 3 against Simon Fraser.

“I think that the main thing that I’ve brought to the team might be a positive energy and … I think I relieve some of the pressure (off other players),” she said. “I do what I gotta do and everybody else does their job too. We all complement each other very well.”

The Silverswords have not had a winning season since 2007 when the team went 15-7 narrowly missing out on the NCAA regional tournament. The team is now 10-1 on the year and is looking to win the conference title and make regionals.

The next game for the Silverswords will be against the University of Hawaii-Hilo on Sept. 26 at 7 p.m in McCabe Gym. The Vulcans are currently 3-2. Chaminade went 2-1 against the Vulcans in the 2014 season.