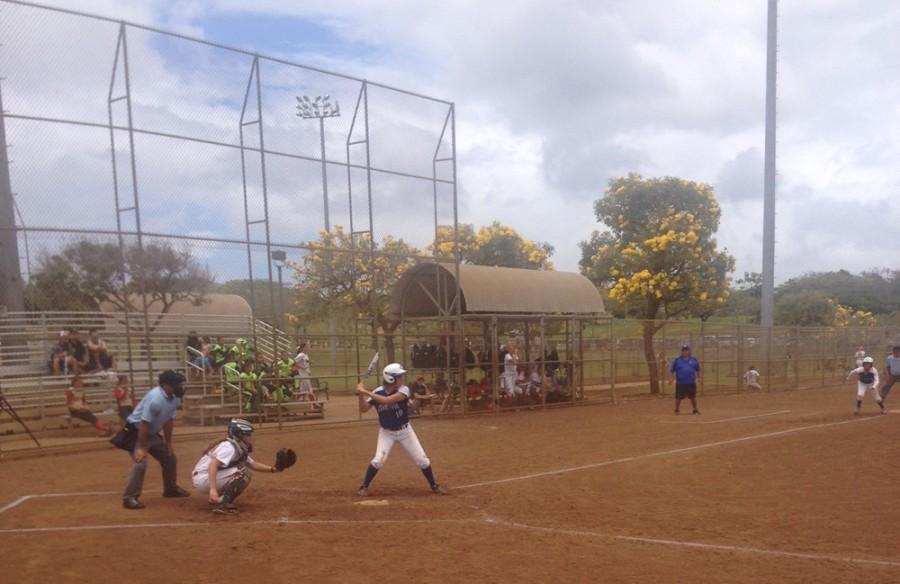 The final games of the season for the Chaminade Silversword softball team were lost in a doubleheader against UH-Hilo Vulcans at Patsy T. Mink Central Oahu Regional Park Sunday.

The first game ended with a close score of 8-6. Afterward, weather difficulties and errors led to the Swords to be blown out by a whopping 7-1.

It was the end of a difficult season for the team. The team suffered through many losses this season with a score of 9-32 overall and 7-23 in the PacWest Conference. The Silverswords had a 20-game losing streak in the last 6 weeks of the season. They lost 24 out of 26 games at the end of this season.

“I was happy how we all came together again,” said Kaitlyn Watanabe, a junior from Maui majoring in Criminal Justice. “It’s the ending of the season and everybody is kind of tired after it the whole semester, but we’re pushing hard out there.”

The games were filled with cheerful encouragement from teammates and coaches shouting positive chants in unison towards each player on the field. The team also received support from family and several Chaminade students sitting in the stands that came to watch the final game of the season.

The weather continuously shifted throughout the entire game. The sun would shine bright and it would become blazing hot and then the sky would turn gray while it drizzles. This sometimes changed the gameplay through the condition of the grass and dirt being played on.

Although the weather was wavering, the family and fellow students endured the shifts just as the players did. The fans sat in their wet seats while they took on and off their jackets for the Silverswords.

“In softball we’re a family,” said Theresa Capllonch, a junior from Kailua majoring in marketing communications. “So you always hear us cheering, but we can only do so much. So when we get people in the crowd, it’s awesome to have that support. It makes us play better.”

However, the supportive cheers from teammates and crowd alike wasn’t enough to help them win in the end of the first game. This score was brought to 8-6.

“We played together as a team,” Watanabe said. “We fought throughout the end and came back with the two runs in the bottom of the seventh (inning), so we just got to keep pushing.”

The Vulcans immediately took a 3-0 lead by a double and a three-run sprint to the left in first inning of the second game. The rainy weather eventually overpowered the game and the team began to have complications.

The Silverswords finally eased in a point in the 5th inning when Kaleen Terayama andMakena Moniz-Jefferson worked together to earn it. After hitting, Moniz-Jefferson moved to center and drove in Terayama.

However, after a few errors and strikeouts, the game was lost.

“Since we don’t have any graduating seniors this season at all, we’ll definitely have lots of momentum next season in the fall,” said Elia Lizarraga, a junior majoring in biology from Torrance, Calif. “We’re all going to come out stronger than we did. We’re going to know each other a lot better and we’re going to be so much better next year.”

Despite the failures of the season, all 21 of the players are expected to return in the next season due to none of them graduating this semester.

“I think this is the most (support) we’ve ever had,” Watanabe said, “Other than the families who come every once and a while, it’s great to see our fellow students coming out to support us. It means a lot to us.”