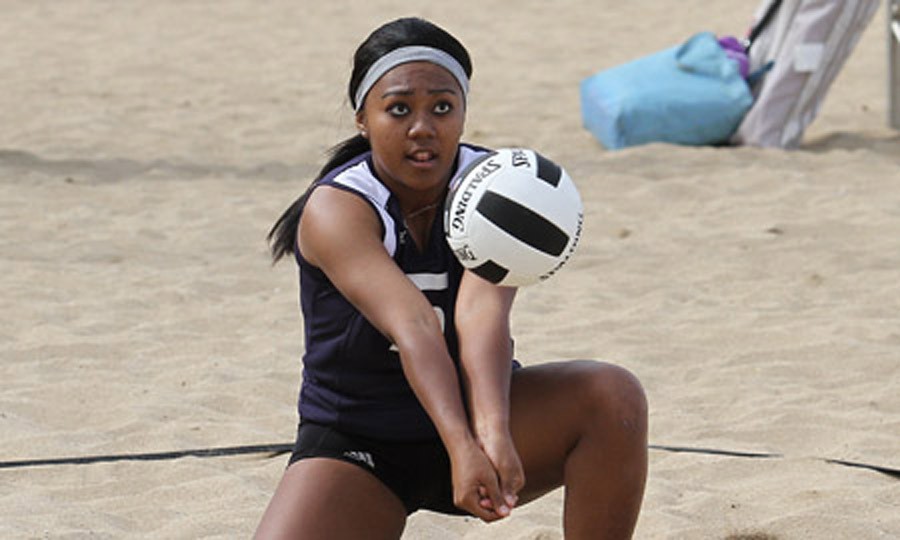 Midterm papers, exams, parties and part-time jobs are normal worries of any young college student. But for 20-year-old Brenda Walker, a sophomore nursing major, dedicated volleyball athlete for Chaminade University and a single mother of a 2-year-old boy, partying is the last thing on her mind. On top of her busy schedule, Walker entered one of her best ceramics pieces in Chaminade’s 2013 showcase of student research and creative work, Na Liko Na`auao.

“It’s definitely not the normal college student life where you can just party and whatever you want,” Walker said.

Although Walker’s schedule is hectic, she admits that it is all for Zehrimiah, her son. He is Walker’s top priority in life and even though she spends most of her time on campus, whether for 6 a.m. volleyball practice or in clinical lab simulation for the nursing program, Walker feels that school can be somewhat of a “jail” because it keeps her away from her son.

While Walker is rushing through endless hours at school for a better future for herself and Zehrimiah, Walker’s grandmother watches him during the day. School hours may seem endless, but Walker expresses the importance of one-on-one time with her son by making up missed time by spending weeknights, weekends and the summer with Zehrimiah.

Spending time with her son is extremely vital to Walker, especially when she is the main parent figure in Zehrimiah’s life. As Walker slightly smiled from the corner of her mouth thinking of past memories, she confessed that every single moment in her son’s life can’t be taken for granted. Now that Zehrimiah is 2 years old, Walker describes how memories are starting to evolve from changing diapers to teaching him how to use the bathroom.

Walker explains that Zehrimiah was practically born into volleyball – the sport in which she has so much passion for. At 2 years old, Zehrimiah impresses all of Walker’s volleyball teammates by knowing how to bump and roll. Zehrimiah is also attentive and supportive at her games by watching quietly and by cheering at the appropriate times and using the correct volleyball terms like hit and spike, which is unusual for a two-year-old boy.

Although volleyball practice days are consistent from Monday to Friday, practice times vary between morning practice beginning at 6 a.m. and evening practice ending at 9:30 p.m. with additional weight room practices at lunch regardless of morning or evening practice. The practice schedule alone is already pretty chaotic, but Walker reveals that acting as a single parent to Zehrimiah motivates her to push through to get everything done.

“It definitely humbles you,” said Walker referring to having a baby at 18 years old.

With Walker’s non-stop lifestyle, she considers ceramics as a stress-relief class. Little did she know ceramics would be a more time-consuming class than expected. Yukio Ozaki, Walker’s ceramics professor, pushes his students to create large, well thought out art pieces. For Walker, Ozaki’s push drives her to produce over-the-top animal sculptures inspired by her son.

“She is very daring in getting the design going,” Ozaki said. “Instead of very conservative, even if the ideas are fairly recognizable … she makes it very daring [and] personal.”

Walker exhibited her first big piece, “aquarium graveyard,” in Na Liko Na`auao 2013 located in Ching Conference Center on Friday. The “aquarium graveyard” is a tall cylinder shaped piece acting as coral, with various sea creatures attached to the outside as if they were swimming. Like all her pieces, “aquarium graveyard” was inspired by her son. Walker confessed that she hates the beach, but Zehrimiah loves animals and the ocean, which inspired her to build such an elaborate ocean-themed sculpture. Because her piece is built for Zehrimiah, Walker wanted to stay away from abstract sculptures so her son would be able to understand the concept of the piece at a young age and appreciate it more.

Even though Walker has no previous art background, she has always found art exhibitions fascinating. When Ozaki announced that Na Liko Na`auao was accepting applications to exhibit art pieces, Walker jumped on the rare opportunity to have her piece in an art show. Because a lot of time went into her “aquarium graveyard” piece, Walker thought it would be nice to exhibit her piece and hear others opinion of her the sculpture.

For many college athletes, sports and school acts as two full-time jobs, but for Walker, volleyball, school and being a single mom acts as three full-time jobs. With her chaotic schedule, Walker explained how in four years it will be worth the trouble. She will be financially stable and living a better life for herself and Zehrimiah.