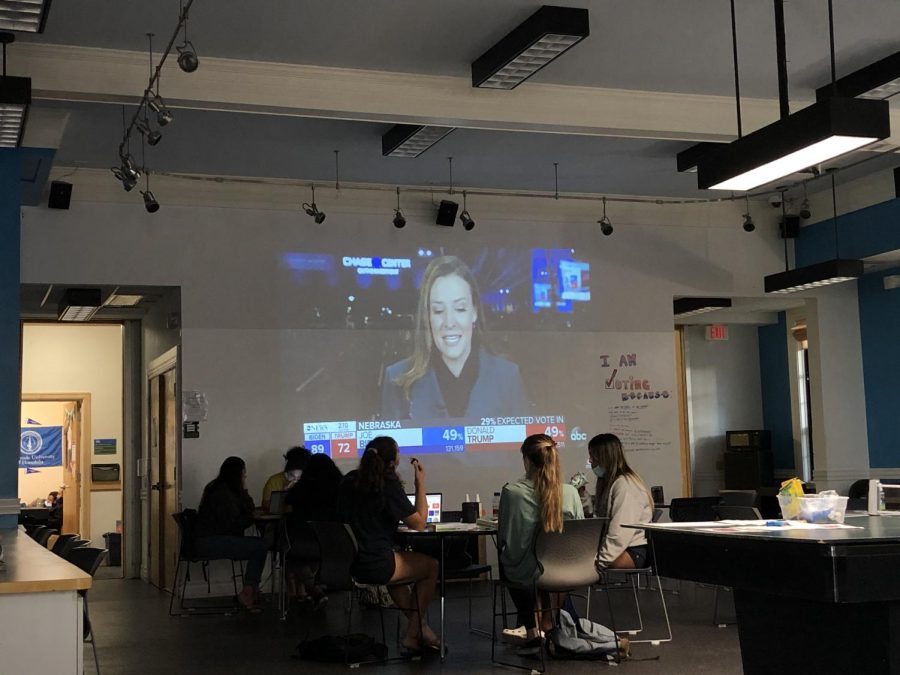 As elections are on the way, students gather in the Loo to check out the poll numbers.

As the elections end on Tuesday, everyone is deciding to head over to the polls, we all sit, watch and wait to see who becomes the new president Chaminade’s OSAL and CSGA hosted an election viewing party, which went from 1 p.m. to 7 p.m. in the Vi & Paul Loo Student Center.

During the viewing party, many students came in and out of the Loo, grabbing snacks that were provided and taking a look at the numbers of the race for president. For 18-year-old CUH freshman Alyssa Grodell, it was more about watching the numbers in her home state of California.

“This is my first time voting,” said Grodell who is a biochemistry major. “It’s kind of stressful knowing that it’s such a big time to vote. But I voted for [Democratic nominee Joe] Biden because his interests aligned with mine on subjects like abortion, immigration, and the Covid response.”

Many students like Grodell come from out of state and are unable to vote in Hawaii during this election because of the restrictions on being able to vote. That was the case for 21-year-old CUH Junior Jason Nowak, who now resides on Oahu after moving here from Mississippi about 3 years ago.

“I didn’t vote,” said Nowak who is a Criminal Justice and Criminology major. “I did not have time to do it and because I do not have a Hawaii ID. I would have to get my ballot mailed from Mississippi and would have to mail it back. But if I did get the chance to vote, I would have voted for [President Donald] Trump because I feel like he is a better delegate than Biden.”

The viewing party was a conclusion of all previous election activities that happened on campus. From Dr. Allison Paynter’s first Emancipation Day talk, to the ice cream social that helped students register to vote, to all the workshops that taught students how to vote based on the reasons of the person and not the person themselves,

“Honestly, I was expecting low numbers,” said CSGA’s speaker of the house Melissa “Ezzie” Dela Cruz. “Like maybe 10 people to participate. But apparently, though out the whole day, there were a lot of people in the Loo, just grabbing snacks and actually participating. We have over 30 signed-up participants, and we have gone through our snacks.”