Last Call For Stairway to Heaven? 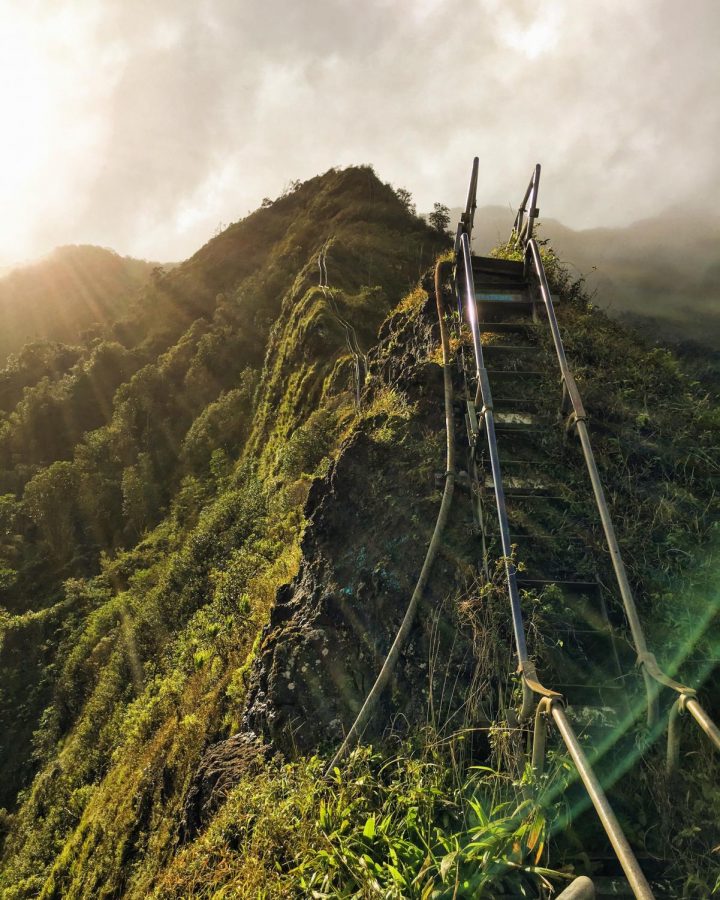 The view from the first platform of the Stairway to Heaven hike located in Kaneohe, Hawaii.

Chaminade alumnus Aris Springs loves Stairway to Heaven. The Guam native, who has lived on Hawaii since 2011, has ascended the 3,922 stairs (which are also referred to as Haiku Stairs) at least 40 times, he estimates.

But the Board of Water Supply, which owns the land that Stairway sits on, proposed in January that the stairs be removed permanently. The BWS’s objective is to eliminate liabilities associated with the Stairway to Heaven, however, it is willing to transfer custody of the property if it finds a suitable third party to manage it.

“To me, Stairway is my symbol of inspiration,” Springs said. “I often find it difficult to describe because Stairway isn’t so much about how it looks as much as how it makes me feel. It was, without a doubt, the hike that made me fall in love with the Hawaiian Islands. That’s why I oppose tearing down the Stairway to Heaven.”

While the BWS is trying to move forward with dismantling the stairs, many young people on the island are deeply opposed to this. The stairs could be removed as soon as mid-2020, according to a draft environmental impact statement released in 2019.

“The BWS worked hard at evaluating each alternative thoroughly and providing an accessible process for public comment through small groups and public meetings with various agencies, landowners, community organizations, and individuals with an interest in this project,” BWS Chief Engineer and Manager Ernest Lau said in the Environmental Impact Statement for Haiku Stairs released in June 2019.

Supporters of the Haiku Stairs are urging Mayor Caldwell to transfer ownership to the city’s Department of Parks and Recreation, resulting in the stairs remaining intact. Mayor Caldwell suggested that he wanted the Department of Parks and Recreation to do just that, he said during an interview with Hawaii News Now in June of 2019. BWS has demonstrated interest in transferring control of the property to another agency within the City and County of Honolulu, meaning the stairs could potentially reopen under the jurisdiction of another agency.

The Honolulu Board of Water Supply retains ownership of the Haiku Stairs and is responsible for managing the property. It is ready to move forward with the removal of the stairs if they are unable to find a suitable third party to take over management.

“I think it would be sad if they don’t find a suitable third party to take over management, because it is a pretty cool thing for both locals and tourists to experience,” said third-year Business and English major Symone Perez. “It’s just like one of those things that make Hawaii so great.”

The stairs have been closed to the public since 1991, yet thousands of thrill-seeking locals and tourists make the illegal climb to bask in the breathtaking views at the summit. BWS Officials believe an estimated 4,000 hikers illegally access the Stairway to Heaven each year. The stairs were last renovated in 2005, yet the trail remains off limits.

Springs proposed that the hike could ultimately pay for its own maintenance if the city were to assign park rangers to have hikers sign waivers and pay entry fees. If they were to create an alternate entry point, there would be less calls from Kaneohe residents complaining of neighborhood intrusions.

“A cheaper solution would be to transfer management to the state, have the state build a less intrusive and safer path to the stairs for hikers, pay for a park ranger to have hikers sign waivers, and charge entrance fees to help maintain the stairs,” said Springs, who graduated from CUH in 2016.

His solution reflects a similar policy instituted by officials of Half Dome in Yosemite National Park in California. The policy is based on a permit system. In order to legally access the hike, you must have a permit. Hiking permits are available by lottery, with a limited number available two days in advance. A total of 300 people per day are awarded permits costing $10 each hiker.

“From early in the morning, I can see their flashlights coming from underneath the lower road and they’re sneaking up to bypass security and they trash the neighborhoods,” Kaneohe resident Harriet Thornley told Hawaii News Now last year.

Many locals to the area appear to be in support of the stairs being dismantled, however, many who are not from the island seem to oppose it.

Taylor Skye Diego, a third-year ENV major from Dededo, Guam, said she thinks that people come to Hawaii to see the islands for their captivating scenery.

“It would be a disservice to the people that do want to see Hawaii for its natural beauty,” Diego said. “So the island itself probably wouldn’t be missing anything, but the people that come to the island to see something that splendid and incredible would be … missing out.”