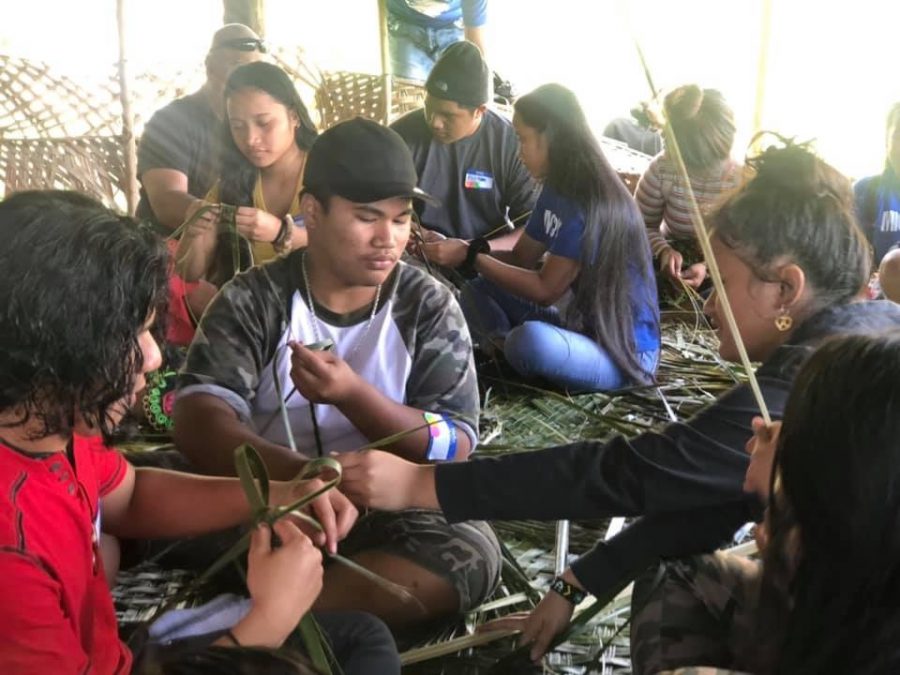 Students were taught to weave under an outdoor Chuukese hut that the island calls an "iteruk," which means thinking house.

When traveling more than 3,000 miles to a place with an entirely different way of living, one might feel overwhelmed with the vast differences of that area compared to one’s home. Jan. 18 was a reminder for Hawaii’s Micronesian youth that there is a community

On Jan. 18, Chaminade University’s Micronesian Club participated in Hawaii’s first multi-school assembly for Micronesian high school students organized by the students themselves. This was hosted by students from Farrington High School at Hawaii’s Plantation Village. In past years, conventions similar to this event were conducted once or twice a the year by non-profit organizations, like the Micronesian Youth Summits by We Are Oceania. However, a number of students from Farrington High School felt that there should be more opportunities to connect with their island brethren from other institutions. 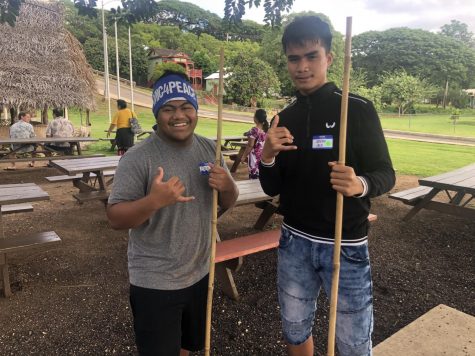 “It’s always heartwarming to see young students actively pursue a certain goal,” said fourth-year CUH Micronesian Club member Mary Anton. “With all the pressures that these kids face in their communities because they are Micronesian, coming together to fight that is very much needed.”

The theme for Saturday’s meeting, titled “Deep In Our Roots,” was finding pride in one’s identity. Throughout the day, students from different schools performed cultural practices, such as weaving and traditional dances, and shared their tales of being discriminated by peers because of their race.

“Our purpose as a group is to show everyone that we aren’t who they think we are,” said Farington student and Vice President of the school’s Micronesian club Jatery Jack. “We want to show them that we are all our own people and that the bad actions of some do not represent all of us.”

The Farrington students began planning for Saturday’s get-together by establishing an official club focusing on the Micronesian culture within their school in Aug. Since then, the organization, which they named Mic4Peace, branched out to the neighboring schools in order to receive as many participants as possible. Soon afterward, Micronesian students from Waipahu High School, Roosevelt High School, McKinley High school, Chaminade and University of Hawaiʻi at Mānoa confirmed their attendance.

The day saw the attendance of more than 50 high school and 15 college students as well as the presence of former Micronesian congressmen such as Setiro Paul, who is now the director of Waipahu’s Chuuk Language and Cultural School. During the program, he and his colleagues expressed their admiration to the young Micronesian students who showed interest in representing their culture in an alien environment. 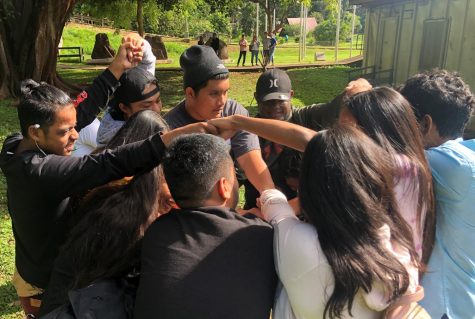 Conrad TimothyThe meeting saw students from the four states of the Federated States of Micronesia, as well as Palau, the Marshall Islands, American Samoa, and Guam.

“Most [Micronesian] kids who were born or move here don’t know a word from their home language,” said Paul. “It’s important for them to know a sense of where they come from or else the culture as a whole will be no more.”

To help guide students through the program, teachers from the Chuuk Language and Cultural Association of Hawaii demonstrated traditional weaving techniques while explaining the significance of each handicraft.

“To see all the work that these high school students put into that and to see it all come to life, it was beautiful,” said UH Mānoa Micronesian Connections President Austin Haleyalpyi. “It brought me back to my roots and reiterated why I do all that I do.”