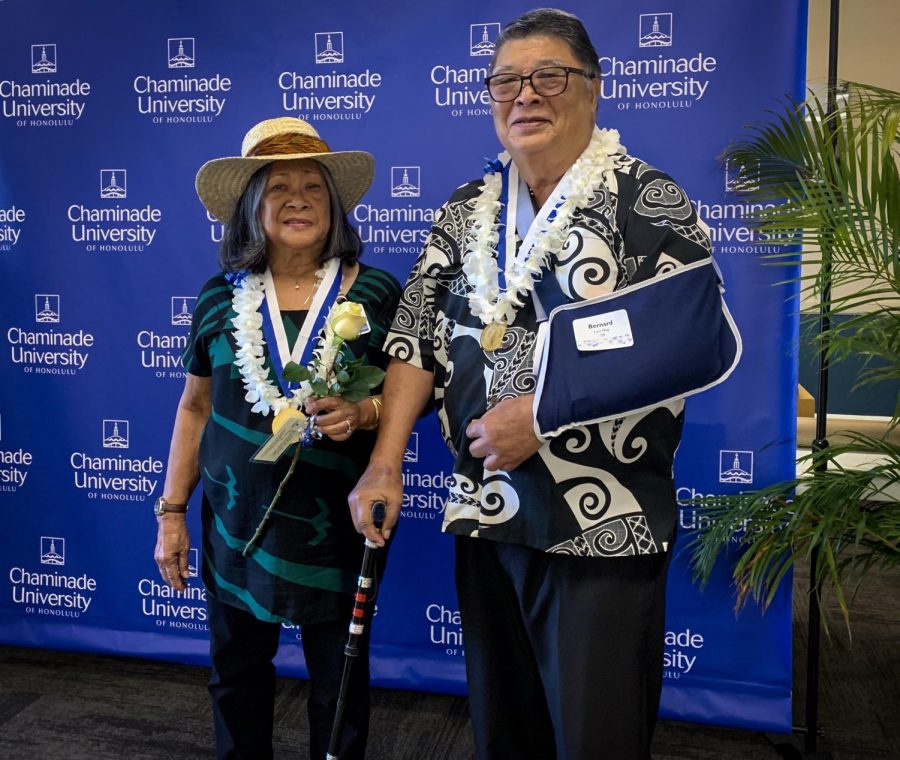 Lolita Lum Hoy '61 with husband Bernard '59, who was honored last Sunday during the annual alumni reunion.

It was 1955, and Bernard Lum Hoy had just completed three years in the Marine Corps during the Korean War. He was about to sign on for another six years, when his uncle told him otherwise.

He was about to swear in that day, but his uncle had picked him and told him that he was going to go to college.

“It’s amazing to be back here today,” Lum Hoy said. “There’s so much changes for the better here at Chaminade.”

Lum Hoy would make history, as he, Leonard Rosa, and Steven Vidinha would be a part of the first graduating class of Chaminade College in 1959. The only surviving member of the three, Lum Hoy was honored last Sunday at the annual alumni reunion and received a medal for the 60th anniversary of his graduation.

“It’s such an honor to meet all these alumni,” Chaminade President Lynn Babington said.  “The alumni and the supporters of the university really help us to keep alive the mission of the university and they help our students.”

When Lum Hoy first came to what was first St. Louis Junior College, there were only two majors: Business and Education. Still a non-accredited male-only school at the time, students could get their bachelor’s degree in either of the two majors.

“So I came up here [to Chaminade], and I talked to Father Mackey. He took my name down, and that’s about it,” Lum Hoy said. “He said, ‘We’ll accept you.’”

Lum Hoy, however, wanted to learn something else – art and its history.

Tutas, one of the founding fathers of Chaminade University, eventually did. They called on the help of Marianist Brother Nicholas Waldeck, a retired artist. He taught Lum Hoy and and Patrick Yim, who was a senior at St. Louis High School at the time and later became a Hawaii judge in the First Circuit.

According to Lum Hoy, he was able to garner enough credits to gain a bachelor’s degree in Art History in 1959. From there, he joined the Honolulu Police Department and helped to create the first ever crime lab in Hawaii. He worked there for 25 years.

Lum Hoy and his other classmates stayed in what was the former military barracks during World War II, where the Mystical Rose Oratory is now.

“We were in the dorm and we were always hungry,” Lum Hoy said. “We didn’t have enough to eat.”

Lum Hoy was not fond of the “haole” foods that were served to him during his time at Chaminade.

“I was from the taro patch country. We were raised like pure Hawaiians,” Lum Hoy said. “We planted our food and we went fishing. Fish and Poi was our diet three times a day.”

He and his friends would hunt for doves at night around campus with an air rifle, and would have that for lunch and dinner.

At Chaminade, Lum Hoy also met his wife Lolita, who was a part of the first female class of Chaminade College when it became a four-year institution in 1957. Lolita was an education major and former teacher at Waipahu Intermediate School said that the changes she saw at Chaminade throughout the years were for the better.

“I like the expansion of the different degrees and different offerings,” Lolita said. “We had very little options when we went to school here.”

Lolita, now 79, and Bernard, 86, are now retired and are currently residing in Waipahu.