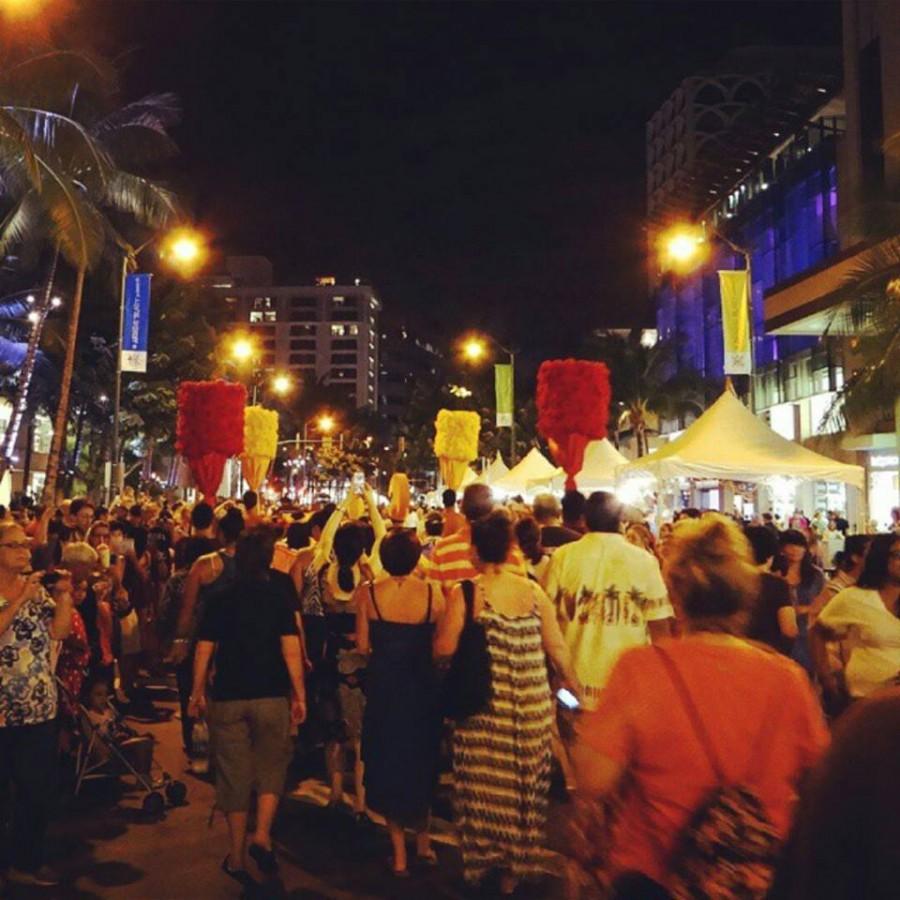 The 62nd Ho`olaulea Aloha Festival that was held in the Waikiki strip on Sept. 20 was jam-packed with thousands of people from all over the island to celebrate the culture, music and history of Hawaii.

“This is my first time at an Aloha Festival and after traveling the world for eight years, this was the highlight of my journey,” said 63-year-old Michael Yatchi from Osaka, Japan, who was accompanied by his wife Jennie Yatchi.

The Ho`olaulea is the island’s largest block party that takes place every year in Waikiki. The celebration took place on Kalakaua Avenue from 7 p.m. to 10 p.m. with a variety of local cuisines and entertainment.

According to Biz Journals, Sam Shenkus, co-chair of Aloha Festivals and marketing director for Royal Hawaiian Center, said the goal remains the same, the events offer an extraordinary experience that people can’t get from anywhere else.

“It’s a throwback to a more elegant time,” Shenkus said. The event, especially the Royal Court Investiture, is like “history coming alive.”

The celebration began with the arrival of royal court that paraded gracefully through the Embassy Suites of Waikiki Beach Walk. Shortly after, various bands and entertainment kicked off the night on the four stages that were set up throughout Kalakaua Avenue.

“It is very hot but the cold refreshments and music is on point,” said Hope Pomel, a 26-year-old student at the University of Hawaii at Manoa.

Hundreds of people crowded around the stages dancing and singing along to the smooth grooves of the local performances. Hula groups also took the stage including Halau Hula o Maiki.

“It’s such a fascinating event to look forward to every year,” Pomel said. “It makes me feel like a Hawaiian and to appreciate the culture even more.”

Along with the 17 entertainment groups that were assigned at specific stages were 25 food vendors and 32 crafts and specialty vendors. Vendors from all around the island, including Mahaloha Burgers and Kai Market, filled the air with freshly cooked local food.

According to the PBN Biz Journals, the Aloha Festival board is made up of 18 members from different industries, which include hotels and banks. It is also an all-volunteer effort with an estimated 10,000 volunteers for the month.

In previous years, the Aloha Festival has generated crowds of up to 70,000 people during its four-part celebration conducted every September.

Both events took place earlier this month on Sept 6 in Waikiki at the Royal Hawaiian and at the Pearlridge Center.

The fourth and last event of the Aloha Festival is the Annual Floral Parade featuring floats and marching bands that was held this past Saturday, Sept 27, from Ala Moana Park along Kalakaua Avenue to Kapiolani Park.