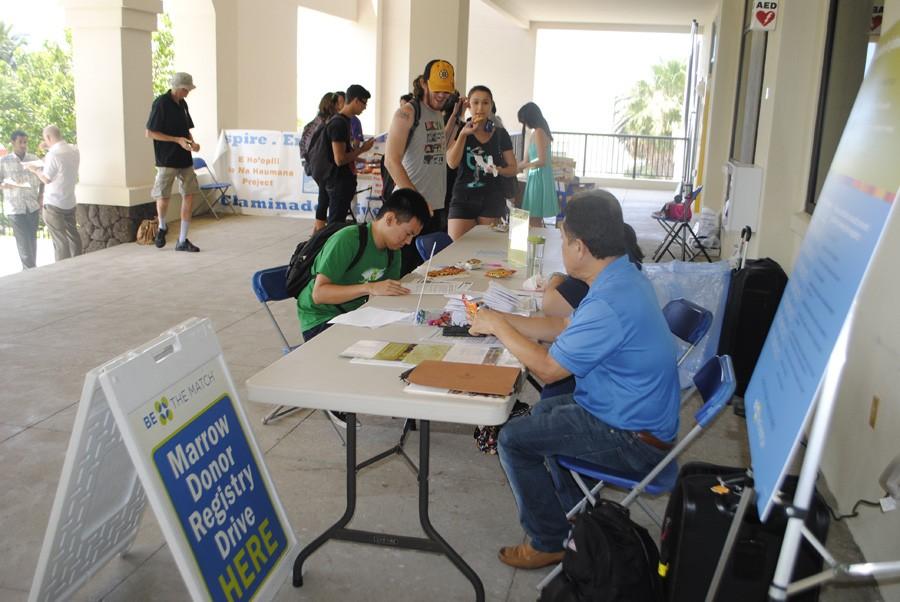 April Mabe received a “life-changing” call on Feb. 13, while sitting in the Sullivan Family Library. She was diagnosed with stage two Non-Hodgkin Lymphoma, which later turned out to be stage four.

“You would think that (finding out the news quickly) was better, but the impact of the news, I don’t think I was ready for,” Mabe said. “Especially that everyone told me it would be nothing, … ‘You’ll be fine.’ When she (her doctor) called me it was shocking, it was life changing though. … I stopped everything, I went from such a busy life to I don’t know.”

Non-Hodgkin’s Lymphoma (NHL) is cancer of the lymph tissue, and is one of the most common cancers in the United States, according to Seattle Cancer Care Alliance. While learning about lymph nodes during a lab class, Mabe discovered her groin area was swollen. She met with various doctors at Queen’s Hospital and later discovered she had NHL.

Yonashiro helped 17 potential donors register for the Bone Marrow Drive on Wednesday outside of the library. The samples students — collected through cheek swabs — will be sent to Minnesota to be processed. It will take four to six weeks until potential donors know if they are a match.

“Most of our drives are focus patient based,” Yonashiro said. “People like a picture to go along with the cause, (to) see what we’re doing and so it makes sense. People need to be associated with something or else they don’t understand, but our job is to explain that she (Mabe) isn’t the only patient.”

A CUH senior, Monique Tsang, registered with the Hawaii Bone Marrow Registry to be a potential donor because her mom and brother passed away from cancer. Tsang donated bone marrow for her brother when she was 5, but although she doesn’t remember donating she wants to help others going through what her mom and brother did, Tsang said.

Chardonnay Pa’o, a current graduate student and employee, was hesitant about registering because she heard the donation process was physically painful.

“I’m telling myself now that if I am a match, I’m gonna do it,” Pa’o said. “… If I’m gonna do one good thing in my life to help someone out, this is totally it right here. It’s an opportunity to save somebody’s life potentially.”

As for Mabe, she has been undergoing chemotherapy since March. In the beginning her body had a reaction to the harsh toxins and chemicals. She recalls chemotherapy as dreadful and as if a bus parked on you.

“After the second day, you just feel like crap,” said Mabe, who will continue chemotherapy treatments for another four months. “I don’t know what to explain or how to explain that. You just feel sick. You’re nauseated. You taste the medicine, like metal in your mouth for weeks. … It’s kinda horrible and it sucks because I never was sick. I didn’t have any symptoms.”

Prior to the diagnosis, Mabe worked as a respiratory therapist at Queen’s Hospital and was a sophomore in the Nursing program. Now, she only focuses on her print shop to earn a living. She is no longer able to be around sick patients in the hospital and withdrew from school in February.

Without school and her work at the hospital, Mabe is admittedly bored. But she’s trying to focus on her improving health and the extra time she gets with her 9-year-old daughter, Aarin.

“I think that everything happens for a reason, and I have a daughter, so I spend more time with her,” said Mabe, who hopes to return to school in the fall. “That’s the best thing that’s came out of this, that I get more time with her.”