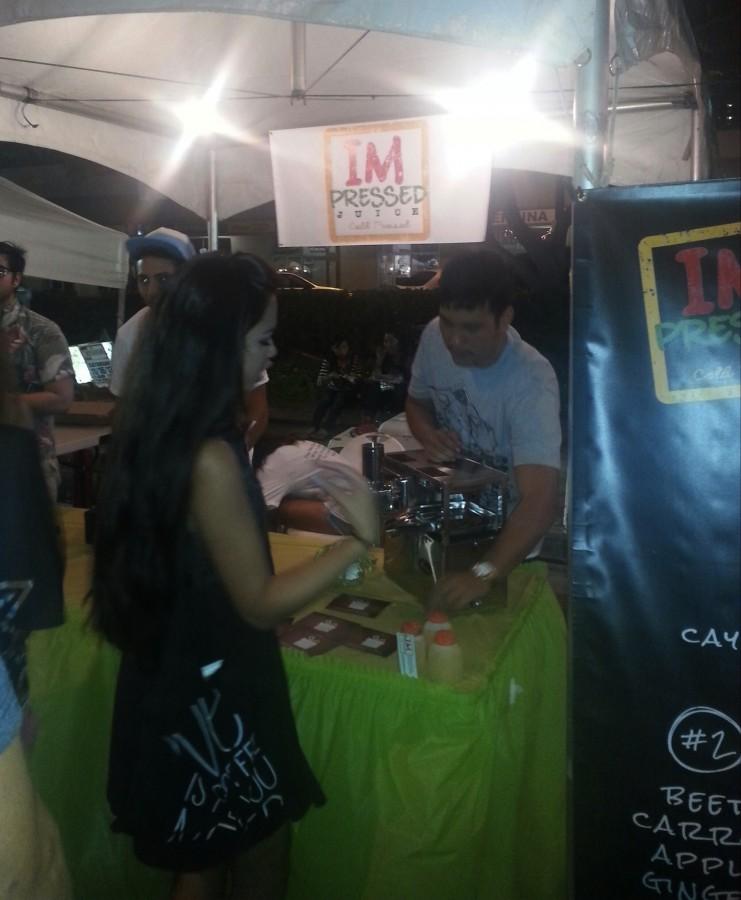 Every college student and working individual wants more energy, a healthier body, and a better ability to multitask. Kale Furuya, a Honolulu native, wanted to make those benefits a reality for people who live busy, demanding lifestyles.

Furuya, Eric Fitzmaurice, and Taelson Larrow are business partners for their company, Impressed Juice Hawaii, which they officially began on Oct. 15. By establishing their business Furuya, 21, Fitzmaurice, 23 and Larrow, 28, became young entrepreneurs. Furuya said that the first conversation he had with Fitzmaurice, when they met as employees of California Pizza Kitchen, was about how they both wanted to start their own company.

“The goal of our business is to promote the health and nutrition of local people here in Hawaii,” Furuya said. “We wanted to develop a convenient way to add fruits and vegetables to one’s daily routine.”

Furuya says that drinking fruits and vegetables is the most effective way for one to get the nutrients he or she needs, because the nutrients can go directly into one’s bloodstream. Furuya, Fitzmaurice, and Larrow can use this knowledge to educate those interested in their product. This is accomplished through selling their juices at different famers markets and local events. Currently, Impressed Hawaii juices are sold outside of Buzz’s Lanikai on Mondays, Wednesdays, and Fridays. Impressed Hawaii juices are also sold at the Honolulu Night Market, KCC Farmers Market, and the Kailua and Ward Farmers Markets when Furuya, Fitzmaurice, and Larrow are able to use these venues. With the owners present at these booths, they can explain the price of their product, which will be $8 for a 16-ounce bottle. The machine they use is a “labor intensive” juicer, which juices the purest form of raw fruits and vegetables.

Nutrition has been Furuya’s guiding passion ever since he studied agriculture as a freshman at the University of Hawaii at Manoa. This study of agriculture gave him the opportunity to work on farms all across Southeast Asia, Oregon, and the Big Island. Furuya decided to forego a formal education and devote more time to his own personal research on starting a business in Hawaii. During this time, he gained a wealth of knowledge on not only how the body works but also how the foods we consume affect our bodies.

Due to the strong effect that food has on our bodies, it is important to the company that the ingredients they use are locally grown and organic. When people drink an Impressed Juice, they are not only keeping themselves healthy, they are also supporting local farms. This dedication to using local, fresh produce earned them a chance to be vendors at the Kakaako Night Market, which features only food vendors that use local produce in their product.

The first one, they say is similar to the “pog” drink, contains pineapples, oranges, limes, and the optional ingredient of cayenne pepper. The second drink includes beets, carrots, apples, ginger, and lemons. The third juice is made with cucumbers, kale, cilantro, apples, ginger, lime, and celery.

The future holds much opportunity for Impressed Juice Hawaii, especially as they make more connections within Oahu. They were a vendor at the XTERRA trail run series, a world championship race that hosted 2,000 runners from around the world on Nov. 24. The Impressed Juice booth sat alongside other booths from big-name companies, such as Gatorade and Powerbar.

Furuya knows that the best form of publicity is for the three owners to live the healthy lifestyles they promote to others.

“I juice every day now,” Furuya said. “Now I have more energy than I did before I started juicing.”