In Search of Interesting Quarantine Activites 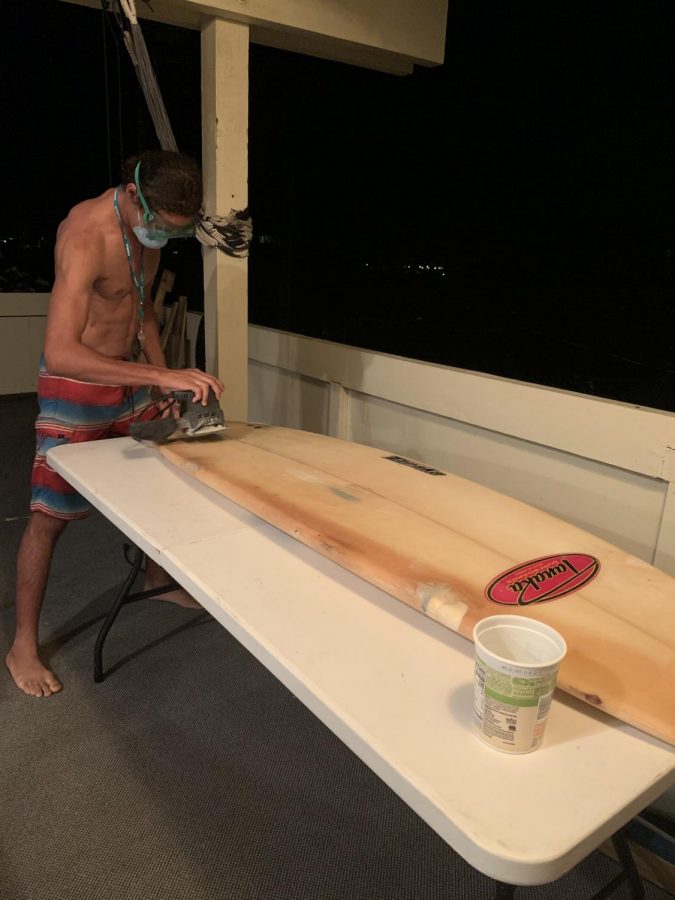 Trevor Accord captured practicing quarantine while working on a surfboard.

Roughly 720 hours (30 days) of sitting, sleeping, and boredom has passed by since the closure of public parks, temporary suspension of dine-in restaurants, and the request made by state officials for non-essential workers to stay home until further notice. On March 18, police officials continued enforcing public park closures. The following day, the city began a 15-day temporary ban on dine-in restaurant service. Finally, on March 23, Governor David Ige announced non-essential workers must stay home unless leaving the house for medical needs, groceries, etc. Oahu saw most of its daily routine changes in late March.

A Kaimuki residence remains full of young people all hours of the day in numbers that occasionally exceed 10. Ten people in the same house trying to avoid each other in order to safely quarantine. It is important to keep yourself productive (inside) instead of taking selfish trips outside of the house to alleviate boredom. There are a plethora of fun and unique hobbies waiting to be discovered by bored people. Popular quarantine hobbies include planting, arts and crafts, and even starting a business.

Trevor Acord, 21, has been working on honing his skills repairing surfboards with his girlfriend, Alena Albertson, 20. Acord and Alberston have both been put on hold from their jobs giving them an abundant amount of time to set up their surfboard repair business. They are both members of the surf community, but have little experience with the hands on work of fixing surfboards.

“We’ve been doing a lot of research on the good ways to repair boards and just kind of mapping out what we want to get done in regards to the work on the boards,” said Acord. “One thing that we learned is it takes a lot of patience. If you rush through it you waste resin and you spill stuff which then creates so much more work for yourself if you rush through it. But if you prepare the board, sand it, clean out the ding, and set the resin, it goes so much smoother than diving right into it.”

Acord and Alberston have been working minimal hours at the same job participating in occasional zoom meetings, but still receiving payment. Alberston still attends online classes for Chaminade while Acord is still looking for another side-job to financially get him through quarantine. With his spare change, he splits the cost of board supplies with Alena.

After a quick trip to City Mill, the team possessed the supplies they needed to open up shop. Supplies used to fix surfboards include: a catalyst, surf resin, filler, fiber glass sheets, a mixing cup, a squeegee, and a sander. The equiptment cost closer to $50 and can fix about five boards (with considerable damage). The couple estimate that they spend about 12 hours a week working on boards. Although the boards they fix are highly damaged boards they find, they have only been able to completely fix a few boards, however have patched up dings in many other boards. When they aren’t fixing boards they’re busy taking care of their plants.

“For starters, we have always had a passion for surfing,” said Albertson. “But since the quarantine has divided our time in various ways, we decided now would be the best time to put surfing on hold so that we can try out a couple new activities and put some time and effort into making it a potential business.”

The original plan was for them to fix their own boards, but they ended up doing such a good job that they had friends reach out for business. Board repairs started at $5 then shot up to $10 when more clientele was gained. Many of the boards the couple has fixed have been severely damaged boards that require much more equipment and time, meaning they will be worth more as inventory than immediate sales. In immediate sales, the couple has made about $40, however they would like to establish their quality before they establish their prices.

Acord and Albertson have been working on honing their surfboard repair skills, while also preparing an herb garden made from an old pallet for the house to use for cooking purposes.

“I just think it’s super dope that once these plants start to grow, our house will have its own fresh herb garden, so instead of going to the grocery store we just walk up to our lanai and snip off whatever herb or spice you need and bam! Fresh, organic, homegrown herbs,” said Acord.

Another  resident has been working on expanding her plant collection. Marissa Minami, 24, currently cares for over 70 plants and has plans to continue expansion. Before quarantine, she managed around 50 plants, but with more time comes more plants. Her collection includes various breeds of house plants and a variety of succulents as well.

“With so much time on my hands I have decided to expand both my plant collection and plant knowledge,” said Minami, Kaimuki resident. “My goal during quarantine is to memorize all the biological names of my plants.”

Minami has been collecting plants since 2017 and spends anywhere from 8-16 hours a week taking care of them in her bedroom space. She finds plants to be therapeutic and relaxing for our mental health. Plants have physical benefits as well as mental, air purification happens to be one.

“I think it’s really important for people to have green spaces if they live in an urban environment,” said Minami. “They can be used to help alleviate mental tension which can be very beneficial, especially during times like this.