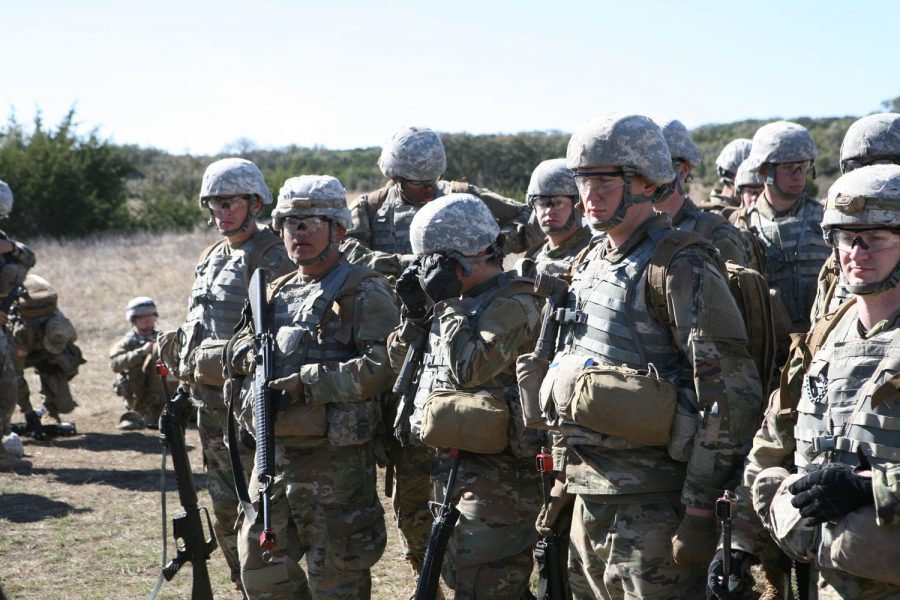 After graduation from high school, CUH student Angelo Oasay (second to the left above) enlisted in the Army Reserves before attending Chaminade University

For most students in high school, they are told to graduate and then continue their education at university. However, 21-year-old Angelo Oasay is a student at Chaminade University, but before attending college, he decided to serve his country before going to class.

Oasay is a second-year student at Chaminade with a major in nursing. However, after graduating from St. Louis High School class of 2017, he enlisted into the Army Reserves.

One of his main reason to enlist was because of his enlisted instructor from JROTC from high school. Another reason was to serve the country that offered many opportunities for him and his family.

Oasay was born in the Philippines and moved to the United States when he was two. His father moved to the states before he born in order to make enough money to bring the rest of the family over. Oasay’s father wanted him to have a better life in America, with better opportunities.

“I wanted to give back to this country,” Oasay said. “They gave me a lot of opportunities since I am an immigrant from the Philippines.”

After graduating from high school, Oasay initially knew that he would go into the Army Reserves in order to get help with paying tuition for school as well as gaining more experience in the medical field.

“The plan was to graduate high school, go to training, get a degree, then serve on active duty if that’s what I decide towards the ending of my college phase,” he said.

Oasay’s position in the Army Reserves was a 68W — combat medic specialist or healthcare specialist.

“They’ve changed the names here and there,” he said. “It’s easier to just say medic or whiskey.”

At first, he wanted to just become a regular infantry marine, but he later found himself drawn to medicine. So he found out that the Air Force had a special unit called Pararescuemen, which is a division of highly trained medics. Oasay continued to float around to other divisions such as the Navy SEALs but ended up in the Army as a medic.

The responsibilities that he has as a medic varies depending on the his position. Currently, since he is a medical unit, he can work anywhere from the hospital or get tasked out to provide medical support to another unit.

Although Oasay has never been on deployment, he has gone away for training.

When it came to training, Oasay went through basic combat training at Ft. Benning Georgia, for 10 weeks. After that, he then went to advanced in

“Training wise, I went through basic combat training, at Ft. Benning, Georgia, for 10 weeks,” he said. “And then advanced individual training(AIT), at Ft. Sam-Houston, San Antonio, Texas for 16 weeks.”

“A lot of things we take for granted were taken away, and it really made me appreciate the little things,” Oasay said. “It got easier as time went on, but still, not being able to communicate with people back home sucked.”

Oasay went on to say that bringing pictures from home really helped him whenever he was feeling home sick during training.

After training, his original plan was to attend Seattle University for a degree in Sports Science since fitness is another passion of his. But when he was at AIT, he came to learn that the communication between the school and him wasn’t as clear. So instead, he applied to Chaminade’s School of Nursing.

After graduation from Chaminade, his plan is to either go active duty or leave the service.

“I either want to go to active duty and be a medic in the special operations community, or be a trauma, ER, and psychiatric nurse as a civilian,” he said.

As of now, Oasay is not stressing about the decision right now and will decided when the time comes. However, he strives to look further than going on active duty.

“It’ll just be a stepping stone because ultimately I’d want to go to medical school to be a trauma surgeon,” he said.