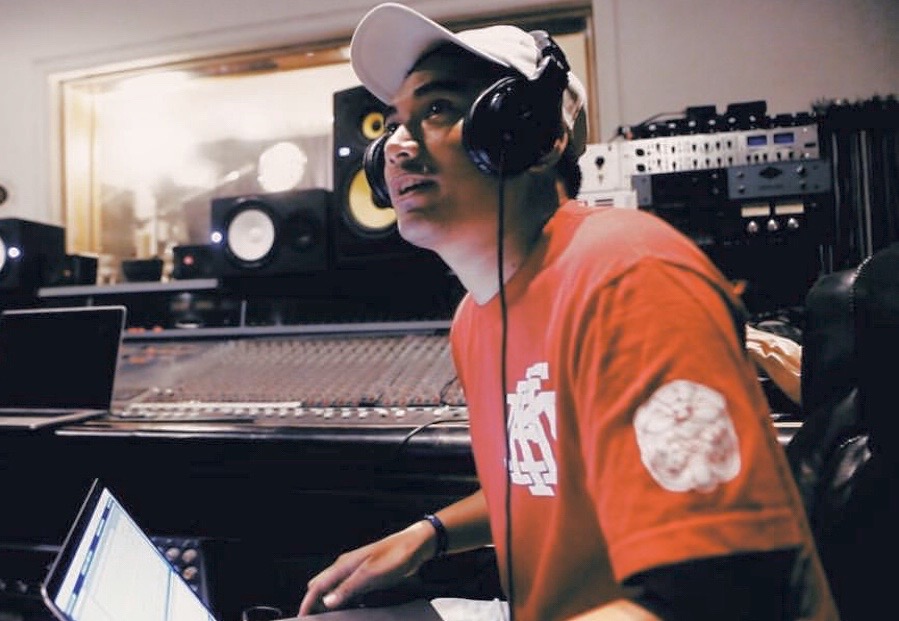 Lapana Ieriko, a local music producer, works on building a song at the Live Animaux in Honolulu.

When Lapana Ieriko grew up, he would listen to The Green, a local reggae band, among other local artists. He watched them perform, dreaming of one day teaming up with them to make music.

“I remember listening to their songs [The Green] and trying to play them, or watching them perform and thinking I want to work with them,” said Ieriko, a 26-year-old music producer from Mililani and the drummer for The Vitals 808. “Now I’m working with them and it’s surreal.” 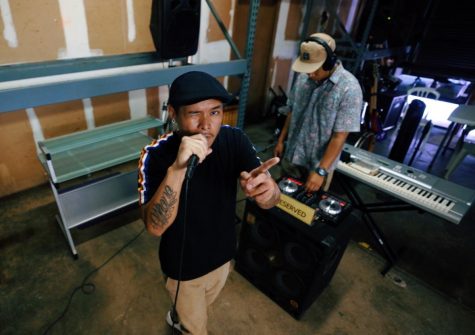 His musical journey started when he was 10-years-old. Ieriko played the snare drum in his elementary school band and continued to play in the Kamehameha’s marching band. By his senior year, a grade-wide infatuation with “making beats” had spread. Ieriko sat back and watched as his classmates attempted to make it big with their rap singles on Garage Band, the app. Meanwhile, he spent time following YouTube tutorials on the basics of making music and honed the skill. Ieriko was inspired by all kinds of music and enjoyed including elements from other genres into the reggae songs he created.

Upon graduation in 2011, Ieriko enrolled in a music business and audio engineering program at Honolulu Community College. Here, he met and joined the members of a local band, Kalani Koa, as they performed around town. Ieriko’s last semester at HCC was spent interning at EKM Records, a label company in Kaneohe that produced a couple of his favorite reggae artists: Siaosi and The Jimmy Weeks Project. Right after graduating from HCC in 2014, Ieriko was recruited on a two-and-a-half-month tour with The Jimmy Weeks Project, where they performed in almost every state. Their journey started in L.A. then moved north to Washington and across to the East Coast.

Ieriko recalls Utah having the most lively audience. The venue was particularly strict, especially regarding alcohol consumption, but the rules that were put in place to keep the audience in check were no match for the sober, yet energized group of The Jimmy Weeks Project fans. The crowd knew every word to each song and danced wildly.

“It feels crazy to know that your music can travel and people actually care enough to come support you,” Ieriko said.

Traveling the country with 10 other humans on a tour bus certainly had its ups and downs. Nights were spent getting “up close and personal” with one another, squeezing together on the seats to compensate for the lack of space. Off days were rare but spent luxuriously at hotels with actual beds. Meals were eaten at the nearest buffet, leaving everyone stuffed and ready to hit the road again.

After living the fast-paced life of a traveling performer, Ieriko, then 21-years-old, decided it was time to open up a studio in Honolulu. He rented out a quaint room with his friends Leslie Ludiazo and JP Kennedy, under Hawaiian Brian’s, and turned it into what is now the Live Animaux studio. This is where Ieriko currently spends his time building songs and meeting with artists to create music full-time.

Some artists are without a team and unaware of how to advertise their work. It’s more common for Ieriko to get contacted to help produce albums, but occasionally he will reach out to those who have a lot of potential. Once their work is finished, he then helps the artist record, and sometimes market or promote, the music.

“That’s my role as a producer,” Ieriko said. “From top to bottom, when they come in with a song all the way to when it’s released.”

Ieriko sought out Jordan Ramirez, a.k.a. Likkle Jordee, after hearing Ramirez in the song “Nighttime Session” on Eli Mac’s latest album “Tricky One.” The album was released in 2017 and a couple months later, Ieriko contacted Ramirez through Instagram hoping to collaborate.

Shortly after, the two met up in the studio and eventually created Likkle Jordee’s “Brand New EP” reggae album, which was released on April 1.

Making connections is an aspect of the music industry that has taken Ieriko far within the field. Ieriko’s connection with The Green is one that he is most proud of. He worked with them on their 2017 album “Marching Orders,” which ended up making it to the final ballot in the reggae category at the Grammys.

Looking back, Ieriko recognizes and appreciates the growth he has undergone, as well as the many successes that have brought him to where he is today. He knows what it’s like to perform and tour. But he has also experienced what it’s like to sit behind the curtain and pull all the strings.

“It’s not everything that it seems to be,” Ieriko said. “But if it’s your passion and you want to do it then you should just do it.”