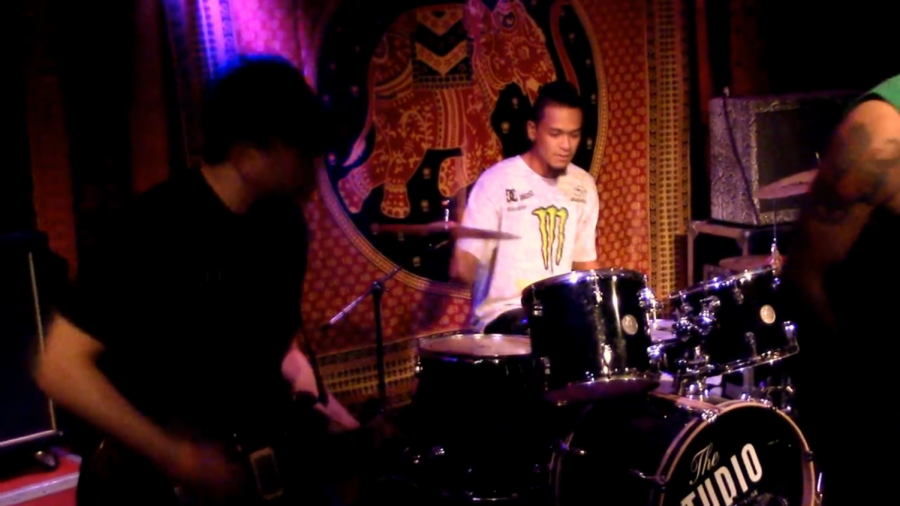 Daniel Hohu, 25, born and raised on the island of Oahu, is a member of the band Shipwrecks. Shipwrecks originally came together as a cover band that is unique in the fact that all its members play for other bands also. Playing up to 10 shows a year with the Shipwrecks, putting together an album with his other band, along with pursuing his Mass Communications degree at Chaminade, Hohu finds the time to be an aspiring musician.

“I play the drums, and it’s been a long time passion of mine, so that comes across when we are playing at a show,” Hohu said. “I get the adrenaline rush and I just love being on stage. It’s a different type of high.”

When asked about his feelings of not getting paid for most shows, Hohu expressed his love for music and that when Shipwrecks is opening for other bands in venues, it’s to help pack out the venue and attract more fans alike.

When asked who influences his playing, Hohu mentioned the likes of Dave Grohl, the longest-serving drummer for Nirvana from 1990 to 1994, and Travis Barker from the band Blink 182.

Shipwrecks plays metal and punk rock genre music. Hohu said the band Slipknot is, in his opinion, the best metal band in the world. Pointing out the nine-member band and its unique performing style where band members would  adorn masks while performing on stage. Hohu says its heavily influenced him and his band’s style of playing.

“Right after high school, I really didn’t want to go to college, I just wanted to play, but I now feel like school is a good fall back to have,” said Hohu. “With Communications, I feel like I can still use it for the music world, so like, marketing or even advertising for cover-bands, touring with bands and helping with promotion.”

When asked how far he would like to go in his music Hohu said, “I want to be on the level of Slipknot, going on tour, traveling the world. I want to go to see KNOTFEST and just mainly going tour and get paid for it.”

After graduation, Hohu is looking to move to the mainland and pursue a career as an artist. He is looking at going to southern California and Oregon where he believes he will be able to flourish and fully follow his passion for music.

For the latest updates on where and when Shipwrecks will be performing, check out there facebook page at facebook.com/shipwreckshi.