The crown jewel of the Hawaiian monarchy 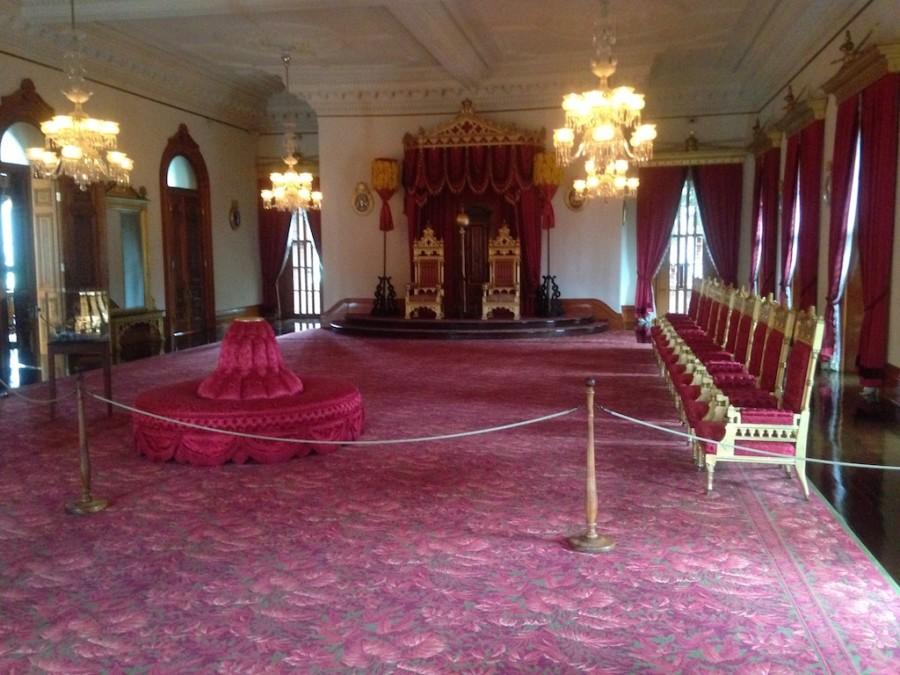 One of the most exciting parts of visiting 'Iolani Palace is to enter the throne room and be able to see the throne of the king and queen along with their crowns.

The Hawaiian Islands are a touristic attraction because of the beautiful landscapes and beaches. When people visit the islands, not many know about the culture of this place.

The ‘Iolani Palace is one of the most important cultural buildings in Hawaii. The palace is a museum that hosts the crown jewels of the Hawaiian monarchy, along with many items and belongings of the last king and queen.

‘Iolani Palace is the only royal grounds in U.S. soil.

The ‘Iolani Palace, or “heavenly hawk” in English, was the official residence of the last king and queen of the Hawaiian Islands. Construction began in 1879 and the palace was completed in 1882, by order of king Kalakaua for him and Queen Kapi‘olani to reside at.

‘Iolani Palace, located in downtown Honolulu, is one of the most precious cultural gems that can be found in the Hawaiian Islands.

The palace has three floors. The basement was probably the most active on the daily because the workers were constantly walking through the kitchen following their duties. The chamberlain’s office (the person who manages the house) was also located in the basement floor. On the second level, there is the main hall, blue room, the dining room and the magnificent throne room. In present day, the throne room has the monarchy’s crowns for display. The third floor of the palace was the main headquarters of the king and the queen, and it also held Kalakaua’s library.

During the monarchy the palace hosted many grand parties, balls, ceremonies and state functions. King Kalakaua’s residence was rich in arts and luxuries; the ‘Iolani Palace had electricity before the White House did. Also, ‘Iolani Palace is well known for the pure silver hinges that Kalakaua designed to use for every one of the main doors.

After the monarchy was overthrown in January 1893 by the U.S. government, ‘Iolani Palace became government offices and was used for business of that matter. It was not until 1969 when the current state capitol of Hawaii was finish that all the government officials moved out permanently from the palace.

This is when the Friends of the ‘Iolani Palace, a nonprofit organization, was created and began the restoration of the place. When the government officials from the American government moved into the palace, they began to auction, give away and steal a lot of the belongings to the king and queen including furniture, jewels, silverware and room decorations, among other items.

The Iolani Palace is now a museum where all profit made is used to keep the ongoing restoration of the place. Most of the original furniture and artifacts have been found and returned to the palace but the search for the ones missing is still underway.

The most important artifacts recovered are, the crown jewels from the king and the queen, the throne room chairs, a very large painting of King Kalakaua, and the king’s royal orders.

A lot of the artifacts that are currently found at the palace are gifts that were presented to the king by important people he met during his travels to Europe and other places, such as the long crystal glasses that serve as windows on the main doors, all the prestigious paintings in the main hall along with a lot of the recovered room decorations we find today in the palace.

Working at the palace has been a great experience for me because I’ve learned a lot about the Hawaiian culture and traditions. It is amazing how after 130 years the grand koa wood staircase are still untouched and well preserved. People who visit from around the world have the opportunity to see those exact same stairs that King Kalakaua used to walk on.

The restoration of the palace is still active and the Friends of the ‘Iolani Palace are still in the search for missing artifacts, furniture or any items that belong to the Hawaiian monarchy.