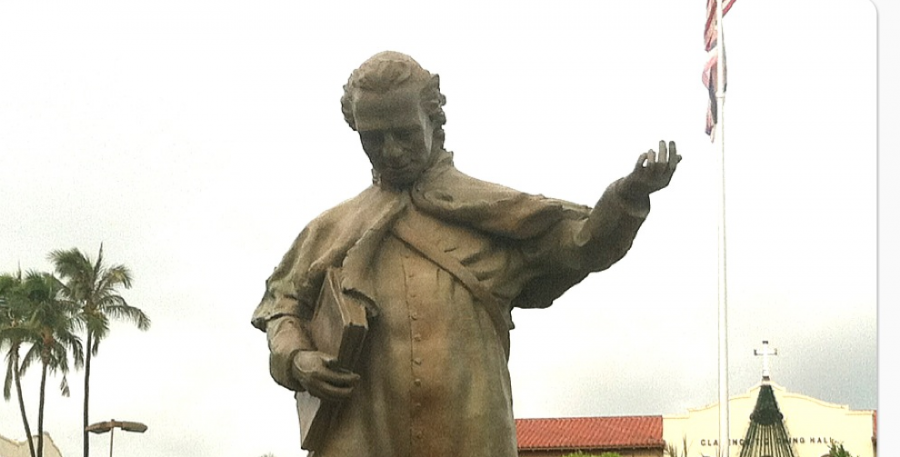 In honor of the 250th anniversary of Blessed William Joseph Chaminande’s birth, the last sculpture of four was set in place mid-November on Chaminade University’s campus.

The statues artist and sculptor, Marianist Brother Joseph Aspell, began his work on the piece of art in Sacramento, Calif. before boating his work and shipping it to its new home on the University campus.

Located in the campus oval and standing three times the size of the average man, the massive 3,000- pound pure bronze statue welcomes guests stopping by for a campus visit.

“It definitely adds something new to the school,” said Carlos Cotes, 18, a freshman at Chaminade University.

The statue was sculpted as a representation for the entire Marianist schools founder, Blessed William Joseph Chaminade.

“What beautifies the campus, inspires student pride,” said Bro. Alana, 30.“This statue shows how the founder would have looked like because he has movement and life. The library statue shows him very stationary, so it is good for the students to have a vision of who he really was as a lively person.”

Chamiande’s new statue is the last of four sculptures to be placed at the threshold for the Marianist universities.

The first sculpture was stationed at the University of Dayton earlier this year, and two smaller versions of the statue were then positioned in the provincial offices of the Society of Mary in St. Louis and at St. Mary’s University in San Antonio. The last to be sent to its new home was the statue to the Chaminade University campus.

“The most recent Marianist Center of Hawaii group helped acquire the Chaminade University statue. It had been in the works for the last year or so,” said Bro. Alana.

Over the last few years, Chaminade University commissioned Brother Joseph Aspell, S.M, the creator of the four statues, because of his noted artistic skills for the universities and Marianist communities. Bro. Aspell has does many pieces of sculptures all over the United States and has worked in a wide range of media involving the creation of many stained glass, painting, ceramics, watercolor, furniture, sketching, airbrush, sculpture, clay and graphic designs.

According to the vocation network, Bro. Aspell said, “My art is trying to show people a larger context for understanding their faith. I think that is where I am most effective: I love to see people learning something new.”

Although this is not the only Blessed William Joseph Chaminade statue that has been created for a Marianist campus, the four sculptures represent the bond the Marianist community stands for. The statues ultimately serve as a gift of thanksgiving for the Marianist and act as a reminder to all the students on campus.

The statue embodies the very story of Father Chaminade. The story of a French priest, who escaped to Spain during the Revolution, refused to take the Oath of Fidelity (that all clergy were ordered to swear), and then drew from the inspiration of Mary to create what is now the Society of Mary, or Marianist, is quite the legend for the university.

The story of Blessed Joseph Chaminade continues to impact the lives of the Marianist and their students. As Father Chaminade brought together many individuals for the initiation of a greater good, the universities are encouraged to do the same for their students.

January 23, “Founders’ Day” is when the ceremony for the blessing of the statue is said to take place. However, the date is not concrete and is still in the process of being decided.

Though Marianist values at Chaminade, and the practicing of the student’s beliefs with love and service to others, Father Chaminade continues to live on at the universities.