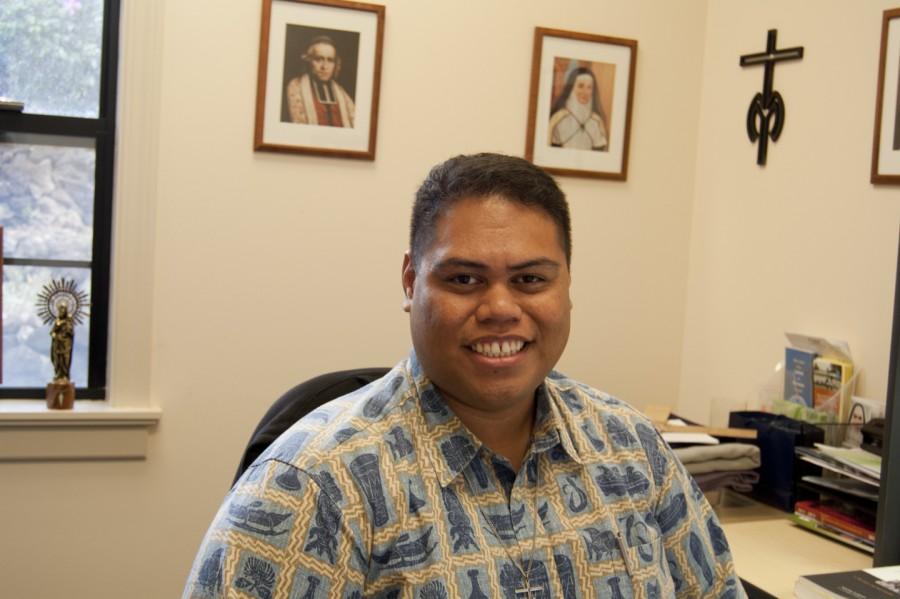 At 18, Brandon Alana set foot on Chaminade University’s campus with a goal to complete his BA in Religious Studies. As Chaminade’s newly acquired Marianist brother, the former Silversword has returned after seven years to lead as one of the new campus ministry directors.

Before coming to Chaminade, Alana grew up in Hawaii until he was about 11 years old. He and his family then moved to Samoa in 1993, where they spent most of their time with Alana’s grandparents before they passed away. Alana then went on to graduate from Leone High School. After high school, Alana decided to apply to Chaminade University of Honolulu and was accepted.

During his undergraduate years at Chaminade, Alana was an active and involved student. He interned in campus ministry and worked as the retreat minister from 2004 to 2006, where Alana said he started to familiarize himself with the campus ministry department.

“At some point in my college career, I realized that I wanted to serve in the church in some shape, way or form,” said Bro. Alana. “… And now it turned out that I am serving the church as a Marianist brother.”

Alana graduated from Chaminade with his BA in Religious Studies, and continued on with his vocation into campus ministry.

In 2006, Alana moved to Antonio, Texas where joined the Marianist Brothers and volunteered at one of the Chaminade sister schools, St. Mary’s University. From there, he went to Chaminade’s other sister school The University of Dayton, Ohio. At the University of Dayton, Alana worked in the rector’s office, and after his first year there, was reassigned back to St. Mary’s where he started officially working in their campus ministry.

Alana worked in his minister position for two years at St. Mary’s, but eventually found his way back to Chaminade.

“I found that when I was doing retreat work, it was very fulfilling and seeing students come to understand, know, and embrace their faith, as their own- that gave me a sense of life and purpose, to say ‘Wow, I helped make this happen,'” said Bro. Alana. “… So to me that was very fulfilling.”

From when Alana departed last from Chaminade he says a lot has changed in himself. He says he has matured in his outlook of the world and in his faith. By working alongside like-minded people, he has come to better understand himself and by doing so, has come to a better understanding of who God is to him.

Some interesting facts about Alana:

*One of the hardest things Alana had to do was eulogize his grandma at her funeral. He says it was hard because he is reserved with his feelings toward someone; so to share all his feelings at the funeral took a lot out of him.

*One of his favorite quotes is by the Marianist Rule of Life. The main premise is that “you live and die a brother; you are a brother at all times.”

*Alana’s music is very eclectic. He likes the 80s, listens to church music (hymns mostly), likes Jo-waiian and traditional Hawaiian music. Some of his favorite bands are Journey and the Bangles.

*He says he was not a troublemaker growing up, though “that doesn’t mean that I am not mischievous—I will leave it at that” were his exact words.

*Alana’s parting words to student reading this is that you should enjoy you college career, and have fun, but always remember that responsibly comes with it.