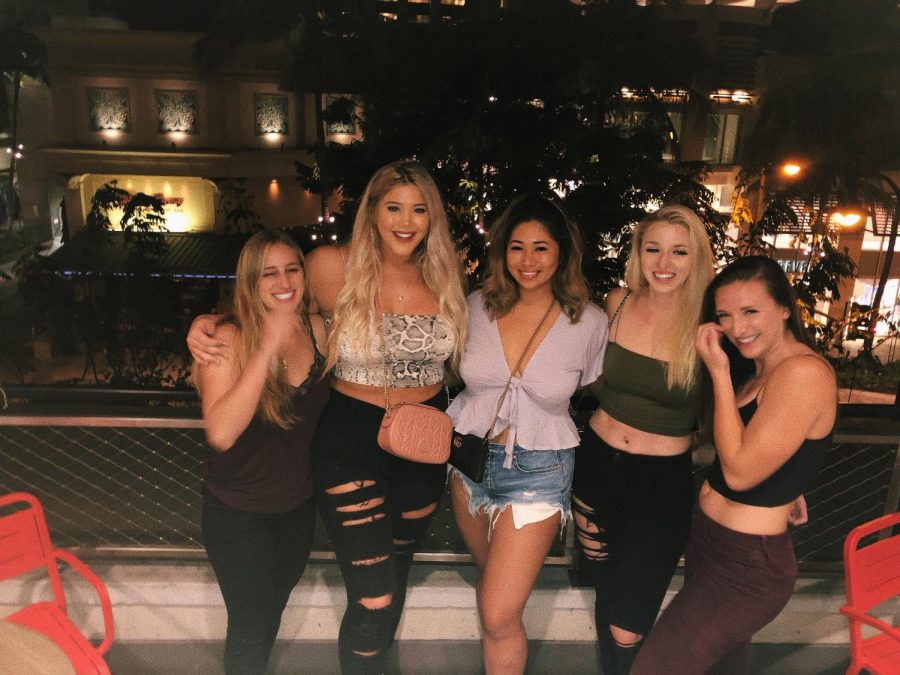 A group of college friends laughing after a night out on the town during spring break in Waikiki.

Staying at home for college may be good for some, but to truly gain the full college experience where you gain independence, friends, and experiences, taking the jump to move is the best. When I was 17 years old, I overpacked my three bags and filled my car from window to window, and road tripped 1,436 miles with my parents’ and dogs from San Diego to Coeur d’Alene, Idaho, to start my first year at North Idaho College.

If moving away 1,436 miles to Idaho from San Diego seemed scary, the move to Hawaii, which was 2,611 miles was even scarier. But there is no other way I would’ve wanted to experience college. Moving away brought me a deeper understanding of people, places, and myself.

After being under my parents’ wings for 17 years, it was a time to try and learn what life was like on my own. College gave the chance to figure me out and a deeper appreciation for my friends and family.

The moment my parents walked out of my newly moved into house in Idaho, I cried and smiled at the same time. Because I knew that I was officially on my own to do whatever I wanted whenever I wanted. But the home-cooked meals, laundry, and consistently full gas tank walked right out the door with them.

Being able to go to McDonald’s at 3 a.m., order a large fry and a McFlurry, without being judged or told not to, was one of the most independent feelings. Having my friends stay over and playing music as loud as we wanted, waking up with a foggy memory of what happened the night before, and going to Dutch Bros three times in one night just to pull an all-nighter for an exam, are some of the memories I still look back on to this day. And all of that was possible because I became independent.

After moving out, I began to talk to my parents on my own. Rather then them coming into my room and nagging me I began to nag them with phone calls. It gave me the opportunity to reflect and appreciate everything my parents did.

Even though I consider my parents my best friends, I still feel like I’m 15-years-old when I go home for break. And that is what happens when you get a taste of independence.

Moving away, I lost all my hometown friends. I was in a brand new town and didn’t know one face. But people also traveled to the school, and my best friend became a girl named Matilda, who was from Sweden. Now I have the chance to travel 5,578 miles away from home to visit Sweden.

Be wary of “friends” who stop talking to you once you move for college or “friends” that use you for what you have. Being one of four girls on the volleyball team with a car, I became the town Uber for athletes, without getting paid. Those “friends” claimed they were my true friend and how much they appreciated me, but in truth, they liked me for what I did for them.

College taught me that not everyone is your friend, and because of that experience during my freshman year, I have learned to be cautious with who to trust. But now, I have six lifelong friends who I consider family because I realized what a true friend is. Without that lesson, I could still be driving around and wasting my gas on people who cared more about what I can do for them.

College is full of experiences, whether it’s late-night food runs, beach days, almost getting arrested, or college parties. Some of those moments will create memories that will last a lifetime, like randomly driving to the other side of the island or pulling an all-nighter to watch a sunrise.

There is so much to explore, so many people to meet, and so many things to try and all those add to experiences that you couldn’t get anywhere else.

When looking back on some years from college the last memory that comes to mind is what I got on my first college exam, rather, the 24-hour drive home in the snow from Idaho with my best friend.

Moving away gives you the chance to explore a part of the world that you’ve had yet to live in.

Being able to have the chance to try manapuas, Spam musubis, or loaded Idaho nachos happened when I moved to Hawaii. Having the time to do a road trip to Canada or a plane ride to the Big Island for Spring Break where memories that will stick forever.

Taking advantage of the time to travel is a huge part of college because it is a privilege.  The closest friends and best memories I have are all with people who I met in college.

When people ask where you go to college, I get the chance to sassily say Idaho and then Hawaii, rather than saying I stayed home. Moving away added a sense of pride to my college experience.

Looking back from senior year, I hardly recognize the young unconfident freshman I once was. The lessons like not being afraid to stand up for yourself when someone has disrespected you or learning when to take fault for a mistake but also to reflect on it are some of the biggest takeaways from college.

College is about exploring and taking advantage of the moment. Like waking up at 5 a.m. for a six-hour road trip to Seattle just for the Nike Outlet or driving in prime Hawaii traffic time to go swim with wild dolphins. Freshman year I was scared to go into the grocery store by myself, and now, I excitedly drive to Los Angeles to explore the city on my own.