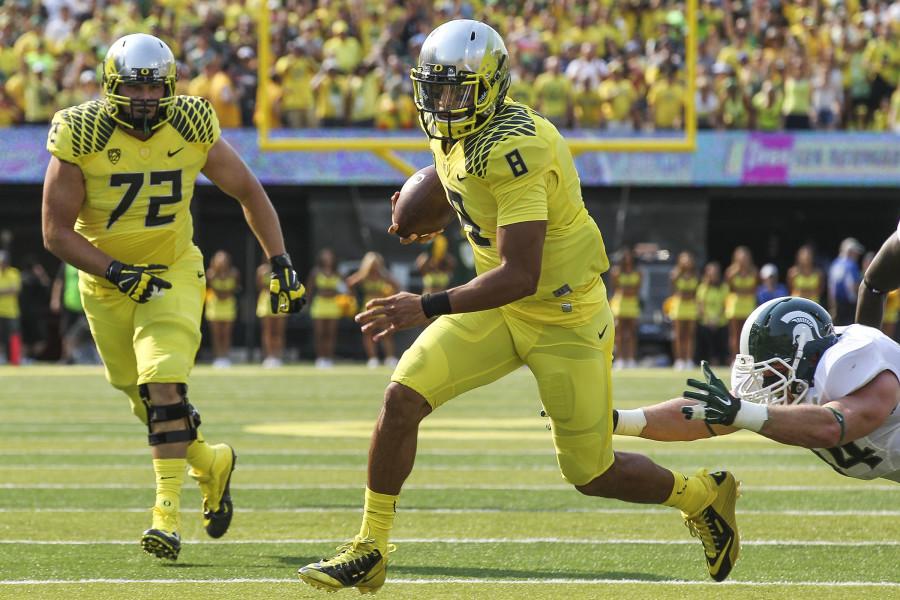 Marcus Mariota won the Heisman trophy in 2015 with the Oregon Ducks.

Athletes come from all over the world to the United States to play professionally and here in Hawaii, we are well represented in some of the biggest sports stages in the world.

Marcus Mariota, football- A standout at the University of Oregon, Marcus became the first Hawaiian native to win the Heisman trophy his senior year. Mariota played in the first college football playoff championship game and lost to the Ohio State Buckeyes. The Tennessee Titans being the second overall pick later drafted him.
Duke Kahanamoku, surfing- Known as the founder of surfing, Kahanamoku was an outstanding swimmer winning five gold medals in the Olympics. His influence on surfing in Hawaii propelled the state and the rest of the country (at least the ones with ocean coasts) that surfing is a fun pastime.
Bethany Hamilton, surfing- Known as that surfer with one arm, Hamilton uses her injury to help promote kids to follow their dreams and not to be afraid of the water. Oh and she’s sponsored by Rip Curl and dominates competitions with only one arm.
Michelle Wie, golf- To play in a US open is one thing, but to win one is a different animal to tame. Michelle won the tournament in 2014 at Pinehurst, North Carolina by two strokes over Stacy Lewis and is now 20th ranked LPGA player in the Rolex rankings.
Shane Victorino, baseball- A two-time World Series champion in 2008 and 2013, Victorino has played in the majors for 13 years. In the 2013 World Series, he had a bases-clearing double off the green monster (that’s the left field wall) in game six propelling the Red Sox to their third championship in 10 years.
Olin Kreutz, football- A six-time Pro-Bowl team member and an NFC champion in 2006 in his 13 years in the NFL. In addition to football Kreutz also wrestled and ran track.
Kurt Suzuki, baseball- In the eight years of his career, Suzuki has amounted to a .255 batting average and was apart of the 2014 American League All-Star team in Minnesota. He is a native of Hilo and received the Brooks Wallace award for being the best shortstop in college baseball.
Scott Feldman, baseball- In baseball, the path to the pros can be daunting especially for Feldman who had to walk on his college team where he went 25-2 in two seasons. Now he pitches for the Houston Astros who are on pace to reach the playoffs since 2005 when they won the National League pennant. (The Astros are now in the American League)
Byron Chamberlain, football- a two time Super Bowl champion in 1998 and 1999 with the Denver Broncos, Chamberlain obtained 2,048 yards in his career at tight end. After retirement from football, Chamberlain started his own charity called the Byron Chamberlain foundation to help kids in need.
Dwayne Johnson, wrestling- Known for his acting skills in movies such as San Andreas and the Tooth Fairy, Johnson has an outstanding record in the world of Wrestling. He won 15 titles to go along with his national title victory with the University of Miami.